Emergency centers in Oneida and Herkimer counties put out a call to area fire departments at approximately 5 p.m. on Tuesday, November 18 to assist with emergency situations related to a  snow storm—now in its third day—that continues to pummel western New York. 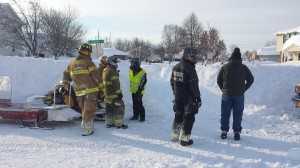 The plea for snowmobiles and manpower to operate equipment and assist with search and rescue efforts was answered by volunteers at the Woodgate and Old Forge Fire Departments ready to sign up for the 24 to 48 hour deployments.

Woodgate Fire Chief Tony Sege and junior firefighter Tyler McGough were on the road to Erie County by 8 p.m., trailering a snowmobile and emergency sled.

They arrived at Bellevue Volunteer Fire Department in Cheektowaga at about 1 a.m. where they immediately went to work.

Acting as support staff at the Bellevue station, Chief Sege said they responded to a number of evacuation calls.

While some were for medical transport to the hospital, the bulk of the calls were from people trapped in their homes without heat, not due to lack of power but because the snow was so high it was blocking their outdoor furnace vents.

“There was so much snow that you couldn’t walk on the surface…you had to crawl. You would sink chest-high in snow if you tried to walk,” Sege said.

He estimated the snow height to be between 60 and 72 inches.

Old Forge Fire Chief Charlie Bogardus and a busload of 35 volunteer fire personnel were on-site for a tour of the Herkimer County 911 Center when the call went out.

Once they reached NYS Thruway Exit 46 (exits 46 through 61 have been closed since Tuesday) they were escorted by State Police to a Buffalo Command Center prior to deployment to neighboring fire departments.

Bogardus said they responded to 42 calls in a 24-hour period, including help for roof collapses.

They were also dispatched to a 135-unit mobile home park where they went door-to-door to assure that residents were safe, or if they were in need of supplies.

Though Parent and Poux were headed home late this afternoon, Bogardus said his department continues to be on standby should the county request further assistance.

“We could be looking at the same situation and in need of resources at some time, so it’s really important to work closely with the counties,” he said.