The annual Elf Walk fundraiser to benefit the Old Forge Library was held on a beautiful and sunny Wednesday, October 1st. Joining in the effort were library elves, Snowflake and Jingle Belle.

More than 30 participants raised close to $800 in pledges in the three-mile round trip from the library to Thendara.

Along the way, walkers made a pitstop at the 19th Green Motel where they were treated to lemonade and cookies by co-owner Nancy Venetz. 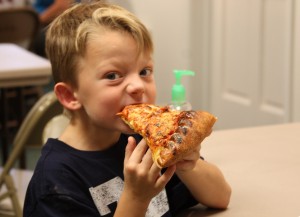 Upon their return to the library the walkers enjoyed a pizza party and prizes were awarded. Katie Kelly won the prize for the most money raised by an individual, and the Bick/Beck/4H Team won for the most funds raised by a group.

The proceeds of the walk are earmarked for the 2015 Adirondack Storytelling Festival.