What a great way to start fall, with cool temperatures at the beginning of the week and summer-like weather at the end. 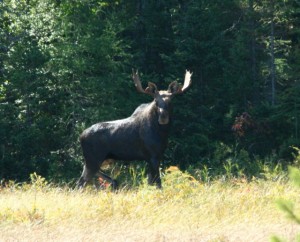 When I was taking out the loon platform on Big Moose Lake on Thursday (9/25) there were many boaters taking their last cruise.

I even saw a water skier.

There are still some warblers hanging around as I caught another Wilson’s and Nashville warbler during the week.

I saw a few others on hikes over the weekend.

During Saturday’s (9/27) Great Adirondack Moose Festival in Indian Lake I took a group into Rockdam in the Moose River Wild Forest.

We saw moose tracks in the trail and some in the road by the ALC gate at the end of the road, so the moose are on the move.

A fella in Indian Lake killed one with his car last week so they served moose burgers  to festival go-ers over the weekend.

We didn’t see any moose during the hike but the leaves along the river at the end of the trail were great.

There wasn’t much water going over the natural rock barrier there in the river, but it’s still a nice place to visit right on the Hamilton-Herkimer County line.

On Sunday I took the guided hike, that was also part of the festival, on the new trail to OK Slip Falls south on Indian Lake.

It’s three miles from the road to the falls through some wet places, but most of it is in mature forests and rolling hills.

Since you are going toward the Hudson River, and only eight-tenths of a mile from the river at the end by the falls, you go downhill a lot on the way in and much uphill on the way out.

The view at the end of the trail is worth the walk.

Go early in the day and get there before noon so you can see a rainbow formed in front of the falls by the sun through the falling water.

Past noon the falls are in the shade, so no rainbow.

There were so many people on the trail that day you would have thought we were going to the top of Mount Marcy.

I didn’t see many folks with back packs, they were just out for a walk in the woods.

A three-mile hike in the woods is more than just a walk and people should be more prepared.

Most had cell phones to take a picture when they got to the falls, which was important I guess.

The leaves were peak over the weekend for sure as the reds and oranges were out everywhere.

Shots opposite the Seventh Lake Boat Launch and Bald Mountain Pond were just about perfect a little after sunrise with a little fog in the shots.

It was hard to tell which way was up when you put the picture on the computer as the refraction in the water was equal to the shot on land.

Aerial shots taken from some of the mountain tops and airplane rides were nothing but a sea of reds, yellows and oranges.

They are falling fast so get out and enjoy them while they last.

I did get out fishing in Townline Pond and Deer Pond north of Tupper Lake for  brooktrout and red salmon.

The brooktrout didn’t bite in Townline so we went over to Deer after lunch and they were biting.

We took a nice brookie and red salmon right away. We had many on the rest of the afternoon but no more in the boat.

Next time we are going to try the rubberband trick because the red salmon have such a weak lip they break free when they jump near the boat.

If you use the rubberband like a shock absorber they don’t normally break free.

We had some nice ones on that broke free just before they hit the net.

The season is open until October 15 so we’ll get after them a few more times.

The red salmon, which was at one time in Bug Lake and Mitchell Ponds, is one of the best eating fish I know.

The APA considers the red salmon a non-native fish. It is no longer being stocked in the park.

There are a few remaining populations which have come from reproduction in places they stocked years ago.

The brown and rainbow trout are not native fish.

I wonder how long these fish will be allowed to be stocked in our lakes? Nothing for the sportsmen—everything for the purist hikers.

Look at the new land classifications in the Essex Chain. Look at it and enjoy it, but don’t use it unless you walk to it.

Lots of Bucks running around…but that’s another story. See ya.