The 17th Annual Roland Christy Cup, a friendly match-play event held between the Inlet Golf Club and Thendara Golf Club was held at the Inlet course on Sunday, September 14th. 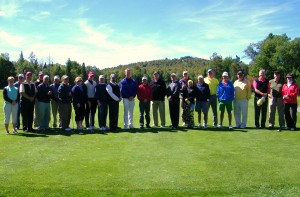 Playing under sunny skies, Inlet was the victor and took back the cup. The prize will be on display at Inlet’s club house until next year’s event.

In the 17 years of the tournament, Thendara has taken the cup nine times and Inlet eight times.

The annual golf competition was established in 1998 as a friendly annual tournament between the Thendara and Inlet Golf Clubs in recognition of the decades of dedication to both clubs by Roland Christy.

In memory of Roland, a scholarship fund has been established in his name through the Community Foundation.

According to Brad Damon, coordinator of the scholarship fund effort, over $22,000 of the $25,000 goal has been raised so far. And with verbal pledges yet to be received, he is confident the goal will be exceeded before the end of the year.

Damon and his committee will coordinate with the Town of Webb School to make a $1,000 annual scholarship available to a graduating student beginning in 2015.

The scholarship will be awarded to a student pursuing a four- or two-year degree or trade school certificate who best exemplifies Roland’s characteristics and shows financial need.

Anyone wishing to donate to the fund can make a check payable to The Community Foundation, referencing the Roland Christy, Sr. Memorial Scholarship Fund.

Donations can be sent directly to: The Community Foundation, 1222 State Street, Utica, NY 13502 or dropped in the collection boxes at the Inlet and Thendara Golf Clubs.

Contributions must include the name and address of the donor to receive an acknowledgement for taxes.

Gifts can also be made by calling The Community Foundation at (315) 735-8212 or online at www.foundationhoc.org.

Online donations should also be designated as a tribute in Roland’s memory.