The 33rd annual Adirondacks Exhibition of Ameri-can Water-colors is currently on display at VIEW, the arts center in Old Forge, and Cory Card, VIEW’s exhibitions manager, encourages anyone who has not yet stopped by to see the show, to take advantage of it before it closes on October 5th. 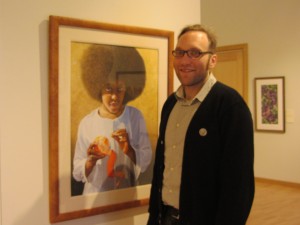 “The exhibit is fantastic this year—as it is every year—but I think this show is particularly strong. It shows a diverse way of approaching the water media watercolors, which in my own opinion, is phenomenal.

“We have everything from hyporealism to abstraction to more traditionally based watercolor, and have received lots of positive feedback. People are pretty astounded with the overall talent exhibited,” Card said. 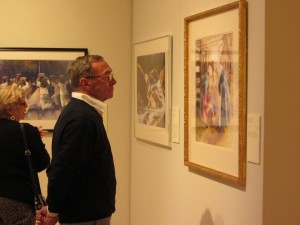 The exhibit features 90 works from over 70 artists from across the United States and Canada, many of whose work strays from what can be seen at a typical show.

Card said the ANEAW has always been that way, that it’s been Mirnie Kashiwa’s (ANEAW founder) concept to keep the show loose.

“That’s what is the most interesting thing about the show. There are watercolor societies that have their own sets of rules and such, but our’s is a little looser because we’re not associated in that way.

“We have some people using wash and regular transparent watercolors, and even acrylic paints with water. It’s not just your regular watercolor show—it’s something much more than that,” he said.

Foot traffic has been great so far, according to Card, with art lovers ranging from senior communities to school-aged groups, to watercolor and art groups, traveling to the area to enjoy the show.

And when time allows, he’ll join a touring group to answer specific questions or describe the different types of techniques used by artists.

Children under 12 are admitted free of charge.

Card hopes visitors as well as locals will take advantage of the exhibit before it ends.

“As Mirnie always says this time of year, ‘The watercolors are at their peak!’” Card said.