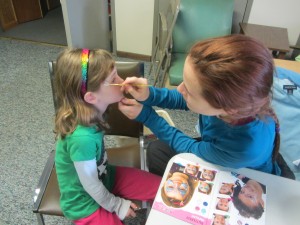 The Town of Inlet hosted the 12th Annual Frozen Fire & Lights, which was once again a great success!

At Fern Park, the sledding hill was a very popular spot, and the ski trails were enjoyed by many while a nice fire was burning to keep everyone warm. The Inlet Public Library had some visitors stop in for their book sale and the Inlet Youth Commission had a very nice turnout for their Noah’s Ark Animal Workshop held at the Inlet Town Hall.

Around 5:30 p.m. people started gathering around the huge bonfire at Arrowhead Park, where free hot cider and Zweigle’s hot dogs were served and raffle tickets for an Ellie Sound 120 XE Kayak were sold to benefit the Inlet Historical Society. This kayak will be raffled off on September 13, 2014.

Promptly at 7 p.m. began the awesome display of fireworks by American Fireworks out of Utica. As Paul Chambers promised, the show was, “Bigger, brighter, louder, and longer than ever!”

The LaPortes in their winning cardboard sled… Mackenzie (left) and Raigan. Standing are Dylan and Wayne.

After the fireworks, many wandered over to Matt’s Draft House at Screamen Eagle for Wine & Chocolate Sampling and then over to The Woods Inn for live entertainment by Double Barrel. 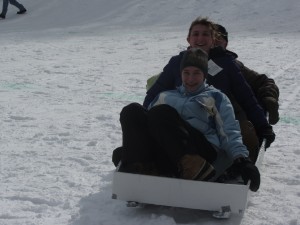 The 4th Annual Cardboard Sled Race was another success! We had 21 entries and handed out five trophies. Speed was broken down into three categories by age. In youngest group, Addison, Courtney and Natalie Hitchcock of Eagle Bay took home the trophy in their “Olympic Bobsled – Inlet 2014” with a time of 8.18 seconds.

Fastest in the middle group was the “Mystery Machine” piloted by Hunter, Amanda and John Lincoln of Canandaigua with a time of 5.9 seconds. Fastest in the oldest group went to Raigan and Mackenzie LaPorte of Eagle Bay in their “Military Jeep” with a time of 6.41 seconds. Because their jeep was so impressive, they also took home the trophy for “Best in Show.” And the award for Great Spirit (and the most rolls with a smile on her face) went to Charlotte Clark of Inlet in “Pink Bullet.” 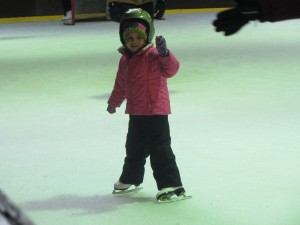