The International Mountain Bicycling Association (IMBA) has been hired by NYS Department of Environmental Conservation to help improve existing and design new mountain bike trails for the Moose River Plains with the goal of making this area a destination for mountain bicycling. 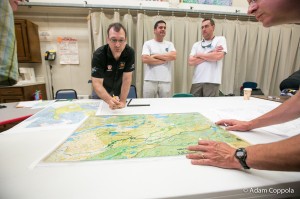 Above right: Ted Christodaro, owner of Pedals & Petals bike shop in Inlet, was involved this past summer in charting possible mountain bike routes through the Moose River Plains. Photo by Adam Coppola

A kickoff meeting was held in October in Albany with representatives from DEC including Forest Preserve Coordinator Karyn Richards, and Chris Leman, a trail specialist with IMBA.

Leman then spent five days walking and evaluating trails and looking for opportunities to expand the trail system between Inlet and Raquette Lake that would take the mountain bike experience to the next level.

Also participating were Max Wolckenhauer and McCrea Burnham, both of the DEC, along with Ted Christodaro, local contact for the initiative.

“While visiting the area I got a lot of help from Ted Christodaro at the local bike shop Pedals and Petals. He introduced me to local riders and facilitated many discussions, field trips to look over area trails, and sessions pouring over maps of the trails in the area,” said Leman.

“The objective was to get an idea of flow, and share what we liked or disliked about a particular area so IMBA could get an idea of what we are looking for,”  Christodaro said.

According to Leman, they are trying to put together a package of trails that would be something that a mountain biker, family or group of mountain bikers taking a trip to the area could explore over a weekend rather than on a single afternoon.

“There are a lot of really great opportunities in the area. Huge landscapes with incredible views and terrain, the type of things that would make for a good mountain bike network—including an interested and engaged community,” he said.

A concept plan will be submitted by IMBA to DEC before the end of the year and a final plan formulated through the DEC review process.

Christodaro reports that some work will begin in the summer of 2014 on the existing trail system.

He is submitting an application to be a recognized chapter under the IMBA.

This designation should come by March 2014. This chapter would be the only IMBA chapter in the Adirondack Park.

“So far over 60 people have shown interest in the club. Many are from out of town, and more local involvement would be welcomed,” he said.

To be put on the email list for up to date information contact Christodaro at (315) 357-3281 or info@pedalsandpetals.com.