Old Forge Ballet Co. students Kerissa Dunn and Alison Russell have been selected for the role of Clara in the company’s production of the Nutcracker ballet that will be performed at the Strand Theatre in Old Forge on Saturday, December 7th. 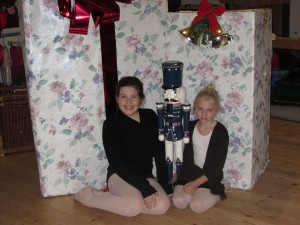 Eight-year-old Kerissa will portray Clara in the 2 p.m. narrated matinee and Alison, 10, will dance the role at the 7 p.m. performance.

This will be Kerissa’s fifth performance of the ballet.

A third grade student at the Town of Webb School, she enjoys sports as well as ballet.

She has danced many roles in the Nutcracker since beginning her ballet training at the age of three.

Kerissa lives in Old Forge and is the daughter of Tory and Jennifer Dunn. She has a brother Dawson who along with their mother also have roles in the show.

The upcoming Nutcracker performance will mark the seventh year of participation by Alison Russell.

Aside from ballet, she enjoys soccer and skiing.

She is the daughter of Patrick Russell and Karen Russell, both of Old Forge.

Her sister Caitlin, who has also played Clara in the ballet, will be performing in the show along with their mother.

The Nutcracker is E.T.A. Hoffmann’s tale that takes place on Christmas Eve at the Stahlbaum house in the 1800’s.

They are hosting their annual Christmas party when the mysterious Godfather Drosselmeyer arrives.

He presents life-size mechanical dolls that are the life of the party, and a wooden Nutcracker to his godchild Clara.

Clara falls asleep after the party and her dream ensues. Nutcracker, toy soldiers, mice and the Christmas tree grow to be more than life-size.

Nutcracker and his soldiers win the battle with the Mouse King and his mice.

The matinee performance of the Nutcracker will be narrated by Sue Ann Lorenz-Wallace.

Pre-sale tickets will be available soon. More information is available by calling (315) 369-8721 or 369-6273, or by email at oldforgeballet@roadrunner.com, or linda_ladue@hotmail.com.