Town of Webb Super-visor Ted Riehle and the Town of Webb Town Board invites the public to a dual ribbon-cutting ceremony on Tuesday, November 5 to commemorate the official completion of the TOBIE trail. 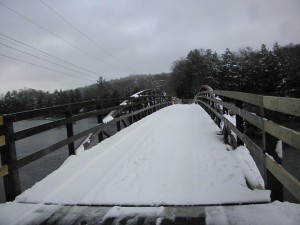 The TOBIE pedestrian bridge at Thendara will have an official opening on Tuesday, November 5. Photo by Gina Greco

Upwards of 70 individuals have been involved in the trail coming to fruition, from the original visioning group to interested residents to local, county and state elected officials.

After 14 years of planning, grant seeking, coordination between local municipal departments, an environmental clean-up in Eagle Bay and two major phases involved in the creation of the trail, the pedestrian walk and bike way now connects Thendara to Inlet.

TOBIE is an acronym for Thendara, Old Forge, Big Moose (a spur of the trail), Inlet and Eagle Bay—the communities connected by the trail.

Prior to construction, parts of the trail already existed in the form of sidewalks and portions of snowmobile trails.

The construction of additional sidewalks and pathways, signage and, finally, the Thendara Bridge and Eagle Bay Welcome Center were the links needed to make the trail continuous.

“There were an incredible number of pieces in the puzzle known as the TOBIE Trail. Thanks to the tenacity and passion of the many people involved, all the pieces have finally been put in place, but not before many obstacles were overcome and many stops and starts. It is a tribute to our community as a whole that this project has been completed,” said Town of Webb Councilwoman Mary Brophy-Moore.