A crowd of spectators gathered at vantage points along the banks of the southern branch of the Moose River on Tuesday, October 8 to observe the placement of the new Old Forge TOBIE trail bridge.

The bridge, which crosses the river, connects the section of the TOBIE pedestrian/bike trail between Hemlock Lane and Pullman Avenue in Old Forge.

The bridge arrived on Monday in two pieces amid torrents of rain. On Tuesday, under clear skies, the pieces were put together on the ground with splices and then set in place in one piece. 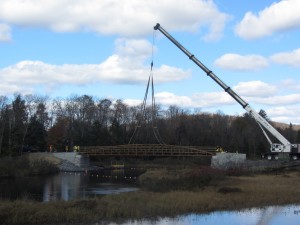 A crane positions the new TOBIE bridge from shore to shore across the Moose River. Photo by Gina Greco

The next steps towards completion are to pave the trail on either side of the bridge, put in some fencing, signs and landscaping, and install gates on either end of the bridge to narrow the space for non-motorized traffic only.

Among the group of observers at the bridge placement were Town of Webb Supervisor Ted Riehle and Town Councilwoman Kate Russell.

“Everything went very smoothly,” said Riehle. “The views are simply fantastic and I think it’s going to be an attraction.”

Riehle said the walking path and bridge will be beneficial for walkers and bikers from a safety aspect as it offers an alternative to crossing the Route 28 bridge.

The trail from Thendara to Old Forge, where it intersects with Joy Tract Road, will be kept open in the winter.

Completion of both the TOBIE Trail from Thendara to Old Forge and the Eagle Bay Visitors Center is scheduled for the end of October/early November. Formal ribbon cutting ceremonies are being planned for late fall, Riehle said.

Riehle is also thinking about a way to honor volunteers who have helped with the TOBIE trail along the way, going back to its inception in 1999 with the aid of the Adirondack North Country Association (ANCA) and a group of interested citizens.

The team reported that 657 local people signed petitions in support of the 1999 TOBIE proposal.

“There has been a lot of effort over the years from a lot of different people. We want to make sure that everyone is recognized,” Riehle said.