The 46 Lounge & Sky Bar, located above Tony Harper’s in the center of Old Forge, is set to open Friday, September 27th. The rooftop bar, which features panoramic views, has been designed to give a relaxing atmosphere to 21-and-over patrons, according to co-owners Brian and Lisa Murphy.

The social area of the establishment is open-air, with the bar under roof. A grassy section encircles the bar. Tiki torches, a curtain, space heaters and large fans with misters are all in place.

“We’ll be ready for whatever direction the weather takes us,” Brian said.

The space was built with eco-friendly features in mind, according to the Murphys, with some recycled materials used in construction. 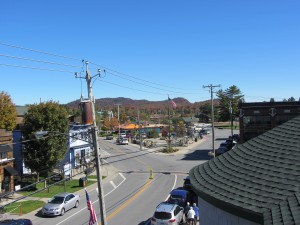 The grass, which is real and will need to be mowed, helps in absorbing rainwater and limits run-off onto the parking lot below. It also provides insulation to the building, they said.

As for the name, the 46 refers to the 46 Adirondack High Peaks. Brian noted that the 46ers are an elite group who have climbed all the High Peaks, and wanted to tie in with an elite bar theme.

The rooftop space was part of the original building plan of Tony Harper’s when construction began in 2009. 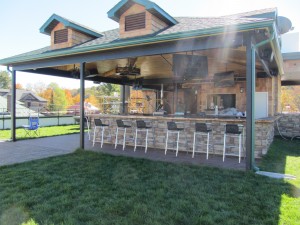 Inspired by a rooftop bar above a Sarasota, FL building owned by Lisa and her husband Don, three engineers worked on designing the space.

“People really like to be outside. The rooftop concept is different—this is what people are excited about,” Lisa said.

Though Tony Harper’s and the 46 Sky Lounge share similar ownership they are totally separate businesses.

There are separate entrances too, as patrons of the Sky Lounge can access the bar by the stairs or elevator on the north side of the building.

The Lounge will offer a selection of specialty drinks including a variety of frozen Daiquiris and Mojitos, with mint grown on site.

Local draft beers from Saranac Brewery will also be available.

While it’s more of a bar than a restaurant, two or three grill items will appear on the menu, changing daily.

The emphasis will be on fresh local foods in season.

Lisa said more people are into fresher, healthier foods, so they will be designing the menu accordingly

Brian said he would like live music to be one of their biggest draws and hopes to feature music at least three nights a week.

In the future, he and Lisa would also like to have a retail space at ground level where they would sell beer, merchandise and food to-go.

The owners expect that the bar will be open from noon to 2 a.m. from May 1 through October 31st, with the space available for private parties.