Performers from in and around the Old Forge community will come together at View on Saturday, August 3 at 5 p.m. for a musical performance, “Songs for the Strand-Movie Music You Know and Love,” to benefit the Strand Theatre’s digital conversion.

Robert Moore will emcee the event that will highlight iconic songs from popular movies of the last 75 years, performed by actors ages nine to 90. 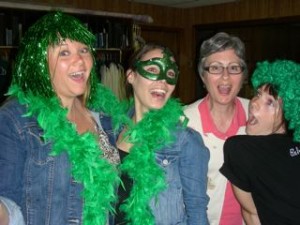 Among the songs are selections from Rodgers & Hammerstein films including South Pacific, Sound of Music and Oklahoma.

There will also be movie and music trivia throughout the show.

Singers representing the Niccolls Church choir, Mountain Theatre Company as well as the community will perform in choral groups, as well as solos, duets, trios and octets.

A choral review with performers from elementary, high school and graduate school age will do songs from Wizard of Oz.

Marie Adams, choral director for the program, said that all of the age groups involved represent the market being served by the Strand Theatre.

“It’s the passion for music and theatre that unites us in support of a cultural institution without which the identity of this community would be significantly different,” said Adams. 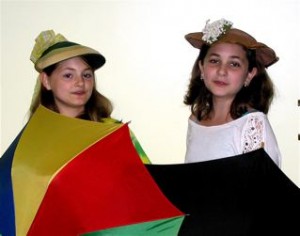 Trinity Liddle of Forestport and Woodgate’s Sarah Beck are ready for the trio they’ll be singing with Inlet’s Rianna Lindsey in Songs for the Strand- Movie Music You Know and Love at View, August 3 at 5pm

View is providing the venue for final rehearsals as well as the show.

“View is very happy to be hosting the event in support of all of these actors and singers that are part of the family of this whole community,” said Alan Saban, performing arts program manager at View.

And the presentation is a true community effort, Adams said, with Mountain Theatre taking care of the costs of advertising, Niccolls Church donating rehearsal space seven days a week, 12 hours a day, Town of Webb School lending the music and some equipment, and Wrap City ‘N Glue creating and printing the posters at a reduced rate.

Saxophonist Bob Liddle will be providing music during the event and Linda Valette was in charge of promoting the event.

Both have donated their services for the cause.

There is no charge to attend the event, but organizers are asking for free will donations of cash or checks that will be directed to the CAP-21 fund in support of the Strand’s digital conversion.

Checks made payable to CAP-21 and earmarked for the Strand digital conversion are tax-deductible.

“We are all part of a cultural family and those of us who are performing believe that through this effort we can generate more benefit to the Strand’s digital crisis than we could do individually. And this is our way of doing what we can,” Adams said.