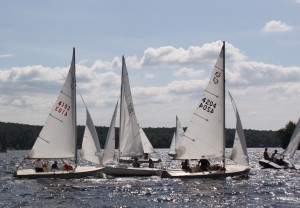 The Central Adirondack Sailing Association held its second weekend of races of the 2013 season on Fourth Lake on July 13th.

The sailors enjoyed relatively good winds the first race but were challenged to finish the second race due to the winds dying down to almost nothing.

This type of race is affectionately known to sailors as a “drifter.”

Tom B. McCabe with daughter Carey Lorraine and granddaughter Meg Lorraine took advantage of the light winds and finished first in both races.

The Wilsey/Hartsig boat and the Steigerwald/Jeffries boat continued their successes from the previous weekend with both boats capturing a 2nd and 3rd place during the two races.

Chris Eichar and David Slater finished both races with a 5th and a 6th place.

CASA was also happy to welcome some new sailors to the races. ohn O’Donnell had newcomer crew Joe P. and McKenna Johnston.

Tom P. McCabe was joined by Grace Lagoner. CASA was most happy to see new sunfish sailors Todd Mander and Jamie Daimon out on the race course.

Sailboat races will be held every Saturday at 3 p.m. on Fourth lake through August 17th.  ll sailboats are welcome, especially sunfish.