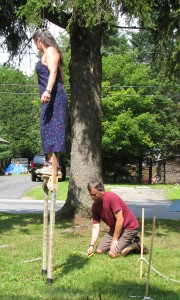 Peter Nelson describes the art of surveying with assistance from his wife. Photos by Dawn Montanye 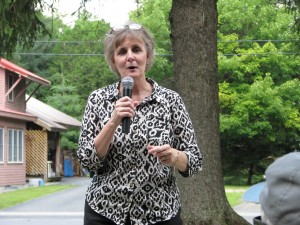 The Goodsell Museum in Old Forge is hosting a Lectures on the Lawn series on Wednesdays throughout the summer that cover various regional topics.

Featured on July 17 was Peter Nelson who gave a program titled, “The Magic of Surveying.” Presented in a fun and interesting narrative, Nelson demonstrated and offered instruction on the fine art of surveying through the use of fractions and triangles. At one point he was assisted by his wife who appeared on stilts.

Nelson teaches college math and is the author of the Lost Brook Dispatches column that appears in the Adirondack Almanack.

Lectures on the Lawn take place on Wednesdays at 2:30 p.m. on the grounds of the Goodsell Museum and are free of charge. Donations are accepted and appreciated.

The topic of the July 24 lecture will be Lost Ski Areas of the Southern Adirondacks. The Goodsell Museum is located at 2993 State Route 28 across from the Old Forge post office. For more information  call (315) 369-3838.