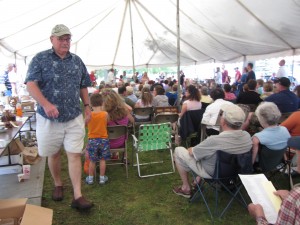 According to Museum Director Kate Lewis, all of the 210 lot items received bids during the auction. One of the top lot items was a picture of the Old Forge lakefront taken from the Forge House in 1915. Another popular item was a three-person canoe with a built in cooler and cupholders.

This year’s auction took place at 11 a.m., instead of the regular time of 1 p.m. at the suggestion of Auctioneer June DeLair of Contableville Auction Hall.

“I would really like to thank our volunteers because they were terrific,” Lewis said, “and I especially thank everyone who came to support us.”