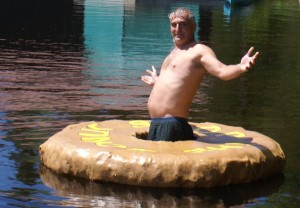 For the last couple weeks, customers of The Donut Shop in Eagle Bay, have been asking owners Pat and Dave Rowe where the donut went—a question prompted by the missing donut-shaped sign that marks the entrance to the legendary eatery.

Patrons thought Pat was pulling their legs when she told them it was last seen in Big Moose Lake, but she wasn’t kidding.

The Rowes contracted with painter Steve Muller of Big Moose to give the sign a facelift. While he was sanding it down, it flipped off the stand he had placed it on. It then rolled downhill and got dunked in the lake.

The fiberglass sign wasn’t damaged by the incident, so Muller had his picture taken in the middle of it and sent it to the Rowes.