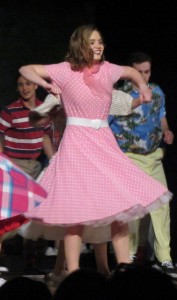 The Town of Webb school Drama Department staged its much anticipated spring musical production at the school on Friday and Saturday, March 11 and 12. Shown performing above is Olivia Phaneuf as Babe Williams. Photo by Gina Greco

Rehearsals are under way for the Town of Webb Union Free School District’s Drama Department production of the broadway musical “The Pajama Game.”

The school’s music teacher, Valerie Gaudin, said she has high hopes for this play.

“We have the perfect amount of cast members for it,” she said.

Gaudin said that, of all the scripts she examined over the summer, The Pajama Game was one that hit home. END_OF_DOCUMENT_TOKEN_TO_BE_REPLACED 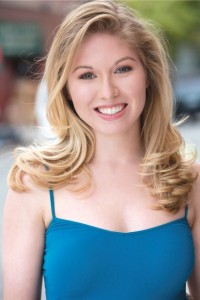 VIEW will bring the classic musical, The Sound of Music, to Gould Hall for a 2 p.m. performance on Sunday, December 7.

The production will be performed live by Adirondack Lakes Center for the Arts and features local and professional actors, including the critically acclaimed Caitlyn Oenbrink who will portray Maria, the lead character of the timeless story. END_OF_DOCUMENT_TOKEN_TO_BE_REPLACED

With the Town of Webb School Drama Depart-ment’s production of Annie Get Your Gun just a month away, the cast, crew and directors have been juggling their busy in- and out-of-school schedules to spend many of their evening hours in rehearsals. 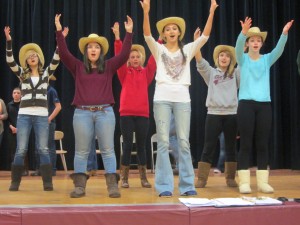 The musical, under the direction of Webb Vocal Instructor Valerie Gaudin and Anne DeFilipps, will be held in the school gymnasium on Friday and Saturday, March 21 and 22 at 7 p.m.

The classic Christmas movie Miracle on 34th Street will come to life at View’s Gould Hall on Saturday, December 14 at 2 p.m. with a musical performance presented by the Adirondack Lakes Center for the Arts.

Melissa Murphy of Old Forge is among the cast of local performers featured in the production.

Miracle on 34th Street tells the story of Kris Kringle’s attempt to help those who have lost their faith believe in Santa Claus again. 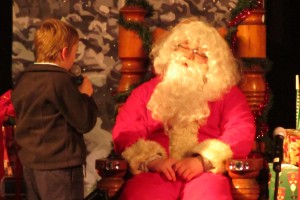 Filled with humor, the musical includes the songs, Pincecones and Hollyberries, It’s Beginning to Look a Lot Like Christmas, and  My State, My Kansas.

It is appropriate for family members of all ages. 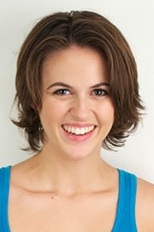 Elizabeth Nestlerode in Violet: The Musical

Violet: The Musical is coming to View, the new arts center in Old Forge, on Saturday, August 20, at 8 p.m. as part of the Adirondack Lakes Center for the Arts Summer Theatre Festival.

It stars Elizabeth Nestlerode as Violet, a young woman whose face was accidentally disfigured by an axe blade when she was 13.

Now in her mid-20s, Violet decides to travel by bus from North Carolina to Tulsa, Oklahoma to meet a televangilist who she believes can heal her scarred face.

The play takes place during the Civil Rights movement in the 1960s and during Violet’s bus trip to Tulsa, she is befriended by a white soldier and a black solder.

“It’s really an interesting story because of the parallels drawn between Violet’s disfigurement and the race issue affecting the black soldier,” Nestlerode said.

Nestlerode, who is performing a variety of roles for the Blue Mountain art center’s summer festival, is a senior at the University of Miami, working toward her Bachelor of Fine Arts degree in Musical Theater.

This is the second summer she has participated in the festival.

The festival’s touring company features professional actors as well as local talent, and Violet: The Musical, is one of their six productions being performed in 18 towns throughout the Adirondack region this summer, covering 2,000 square miles.

Nestlerode is also a director and was musical director of Nunsense the Musical, that was performed at View on June 25.

“I was responsible for teaching the music and working with the actors on all their singing parts. I also played piano for the show,” she said.

Nestlerode grew up in Seattle, Washington and attended an elementary school that offered a theater program which inspired her love of performing.

“I started doing shows in fourth grade and I really got into it. By the time I was in the eighth grade I was always looking to do a show,” she said.

Roles she has played in the past include Sally Bowles in Cabaret, Diana Morales in A Chorus Line, Olive in Putnam County Spelling Bee, and Betty Lanza in Mario Lanza.

As the lead in Violet, Nestlerode acts, sings and dances.

“There’s quite a range of music, some is from the 60s, and there’s also toe-tapping gospel numbers in the church scenes set in Tulsa,” she said.

The music was composed by Janine Tesori, who wrote the music for Thoroughly Modern Millie and other Broadway hits.

The lyrics are by Brian Crawley. The play premiered off-Broadway in 1997.

“I haven’t heard of another company doing a production of this show in the last seven to 10 years. It’s incredibly rare and it’s a hidden gem,” she said.

“We are thrilled to be welcomed by Alan Saban (performing arts manager at View) and to have the opportunity to bring our show to Old Forge.”

Tickets for Violet: The Musical or available by visiting the website at www.ViewArts.org, or by calling (315) 369-6411.