Town of Webb Supervisor, Ted Riehle says it has been a busy week with the engineers and contractors examining the TOBIE Trail, Lock and Dam, and The Eagle Bay Welcome Center.

At the town board meeting on Tuesday, June 10th, there was a lot of discussion about the updates to these three projects.  END_OF_DOCUMENT_TOKEN_TO_BE_REPLACED

Town of Webb Supervisor Ted Riehle has announced that rehabilitative work at Lock and Dam, which was expected to wrap up by Labor Day, was completed on Tuesday, August 20 by Jablonski Excavating, Inc.

“As of Tuesday the water level was back to normal and the water was flowing over the spillway. Today (August 21) they are backing out and cleaning up the site. The project is finished ahead of schedule,” Riehle said. 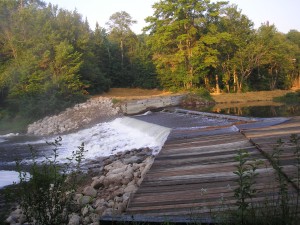 The construction project, which began on July 8, was monitored along the way by engineers from Clough Harbour & Associates who were on-site August 21 to perform an inspection.

“They were happy with everything they have seen. Things went well and everything is back in service,” Riehle said.

During the rehabilitative process, Jablonski created a diversion structure on the railroad side of Lock N Dam in order to divert the river. Once the river was diverted, construction began on the spillway itself.