The Town of Webb town board met on Tuesday, July 10 for its regular monthly meeting, where it heard and considered a number of matters on the public’s behalf. Following are some of the items.

• The board received a letter from Jennifer Hartsig which asked the board to consider urging Time Warner Cable to add some currently excluded Okara Lakes residents to its service territory.

She said she and others have contacted Time Warner Cable directly, but that a support request from the town board would be of value.

Hartsig’s request was included in public meeting discussion on Tuesday, July 11 about the town’s proposed contract renewal with Time Warner.

• Mary Lemire, president of the Old Forge Garden Club, sent a letter to the Town of Webb Board thanking the town for its funding support of the Club’s annual planting at the Point Park.

“The Park is a focus for downtown,” she wrote. “[The Club] looks forward to partnering with the Town in maintaining the Park in years to come.” END_OF_DOCUMENT_TOKEN_TO_BE_REPLACED 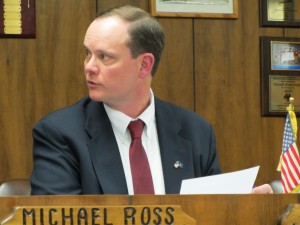 Supervisor Riehle presided over his first Town of Webb Board meeting on Tuesday, January 3, 2012. Photos by Jay Lawson

At the organizational Meeting held Tuesday, January 3, the Town of Webb Board welcomed and swore in the town’s new Supervisor, Ted Riehle, returning council member J.B. Herron, and Mary Brophy-Moore who will be serving her first term on the town board.

Jack Graham was sworn in as Webb’s new Town Justice. Following the swearing in, a resolution was made and passed by the board regarding the meeting times for 2012, which will remain the same as in 2011, the second Tuesday of the month.

It was also resolved that the Old Forge branch of Community Bank and Adirondack Bank be designated as the official depositories for the Town of Webb. END_OF_DOCUMENT_TOKEN_TO_BE_REPLACED

Two local real estate brokers were elected as directors of the Northern Adirondack Board of Realtors (NABOR) at the organization’s annual meeting held in Lake Placid on Tuesday, October 4.

George W. “Bud” Hippisley of Adirondack Mountain Realty of Old Forge was re-elected as a director, and was also elected treasurer for the calendar year 2012.

Dawn Timm of Timm Associates of Old Forge and Blue Mountain Lake was newly elected to the board of directors. She will serve a three-year term beginning January 1, 2012.

NABOR, with offices in Plattsburgh, is co-sponsor of the Adirondack Champlain Valley Multiple Listing Service. All members, officers, and directors are licensed realtors and members of the National Association of Realtors (NAR).

The Town of Webb UFSD Board of Education held a meeting on Tuesday, September 20, where it took the following action:

Republican Bill Faro of Inlet is running for a third term on the Inlet Town Council in next Tuesday’s primary race.

As an over 20-year resident of Inlet, Faro has a long record of service to the citizens of the town as a business owner and volunteer. END_OF_DOCUMENT_TOKEN_TO_BE_REPLACED

The Town of Webb UFSD Board of Education held a meeting on Tuesday, August 16, with Jack J. Boak, Jefferson-Lewis BOCES District Superintendent, in attendance.

He explained the process for selecting a new Super-intendent for the district and gave members a draft timeline.

The Board of Education took the following action: END_OF_DOCUMENT_TOKEN_TO_BE_REPLACED