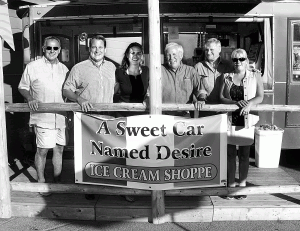 During his tour of Old Forge on Sunday, July 29 to discuss his tourism agenda, Republican congressional candidate Matt Doheny stopped at the Sweet Car Ice Cream Shoppe of local businessman Chip Kiefer and his family. Pictured are, from left, Mike Farmer, Matt and Mary Doheny, Chip Kiefer, and Dick and Roxanne Bird. Photo by Maureen McAuliffe.

Matt Doheny, Republican Congressional candidate for the 21st Congressional District of New York, was in Old Forge on Sunday, July 29 to kick off the tourism week portion of his 50 Businesses in 50 Days Campaign.

Doheny, his wife Mary, and staffer Maureen McAuliffe arrived at the Old Forge Information Center on Sunday to take a tour of area hot spots which included Enchanted Forest/Water Safari, the Adirondack Scenic Railroad, Souvenir Village, the Naked Moose, and Tony Harper’s, as well as to talk with area business owners, residents, and tourists.

The fact that he picked Old Forge over those other areas to launch the tourism phase of his campaign is really significant,” Farmer said.

Visits to Lake Placid and Lake George followed this past week.

As part of his 50 in 50 Tour, Doheny will visit many different segments of the district to meet with residents and business owners who are helping to drive the economy.

Each week of his tour will focus on a different facet of industry: tourism, agriculture, health care, technology and communications, and manufacturing.

“We thought it was very important to stop in a great area like Old Forge where tourism is a critical part of the local economy,” Doheny said. END_OF_DOCUMENT_TOKEN_TO_BE_REPLACED

The Central Adirondack Association is seeking volunteers to man the booth at the New York State Fair in Syracuse.

All volunteers will receive admission tickets to the fair, $10 for parking and up to $50 for gas.

The booth must be staffed from 10 a.m. until 10 p.m., a requirement by the State Fair Board. Six-hour or four-hour shifts are available. END_OF_DOCUMENT_TOKEN_TO_BE_REPLACED

The Old Forge Library will host three authors who will share their interest in “The Art of Adirondack Cooking” at a special event on Tuesday, August 7 at 7:30 p.m.

Hallie Bond, regional history author and curator at the Adirondack Museum, will moderate the panel of cookbook writers who will share their interest in cooking.

Panelists include Louise Gaylord, who compiled a long list of recipes from family and visitors to her summer home, Camp Trillium in the 2010 release, “Recipes from Camp Trillium.” Nancy Best, author of “Learning to Cook Adirondack,” is a fourth generation Adirondack native who was raised in Thendara. Best’s book is a collection of recipes combined with fond memories.

Michelle Maskaly is the creator of the food, lifestyle and travel website “Adirondack Chic.” A self-taught cook who loves entertaining, creating new recipes.

Each panelist will bring a dish from their recipe collection and will share historical and family backgrounds which led to their interest in Adirondack cooking.

Local Red Hatters will enjoy lunch at the Soda Fountain in Remsen and a shopping trip to the Newport Marketplace on Tuesday, August 14th.

Carpooling will be available from the Inlet Town Hall at 11:30 a.m. and from the Strand Theatre parking lot in Old Forge at noon.

Antique dealer Mathew Scheidelman will offer antiques appraisals at the Goodsell Museum on Saturday, August 11 from noon to 4 p.m. The event is sponsored by the Town of Webb Historical Association.

Scheidelman, who has 34 years experience as an antiques dealer, will appraise up to three vintage or antique items per person for a donation of $10.

He will meet individually with participants in the Research Room at the museum to discuss the fair market value, age, and other information about their items.

Proceeds from the appraisals will support the general operations of the Goodsell Museum. END_OF_DOCUMENT_TOKEN_TO_BE_REPLACED 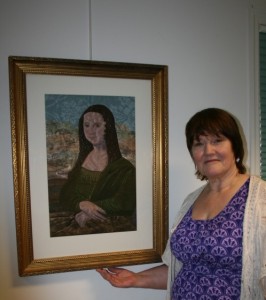 Philippa Shrader and her fabric portrait of the Mona Lisa. Photo by Carol Hansen

An art exhibit showcasing the work of artist Phillipa Shrader titled, A Textural World, is currently on display in the Judith Lowenstein Cohen Memorial Wing of the Old Forge Library.

Visitors to the library will have the opportunity to view Shrader’s paper arts that utilizes texture to create depth and playfulness through her works.

An opening reception for Shrader will be held at the Old Forge Library on Friday, August 3 from 5 to 8 p.m. as part of the Old Forge First Friday Artwalk.

Inspired by a twentyplus year French tradition, Five Corners Café in Old Forge will host a Diner en Blanc pop-up picnic inside the Gallery at View on Thursday, August 30.

The concept of the pop-up picnic had its beginnings in 1988 when a Frenchman, Francois Pasquier, returned to Paris following a few years abroad. Wanting to re-connect with friends, he arranged for all to meet for a party in a public space. He requested everyone wear white so they could easily recognize each other.

What began as a humble gathering of friends has grown to an annual mass picnic in many cities throughout the world that attracts up to 10,000 participants.

In a traditional Diner en Blanc, not only are guests required to wear white, they are also required to bring everything needed for dinner-including chairs, tables, food, wine, and white trash bags- to a location that is not revealed until the day of the event.

In their twist on the French tradition, Kathy and Paul Rivet, owners of Five Corners, will provide the venue, seating and a four-course meal prepared by Chef Paul.

“We feel View is an ideal location and the gallery space will be a beautiful backdrop at dinner. Guests do not need to bring a thing-we have that covered.

However, we do ask that everyone dress in white to share in the tradition and create a sense of togetherness that the event inspires,” Kathy said. END_OF_DOCUMENT_TOKEN_TO_BE_REPLACED