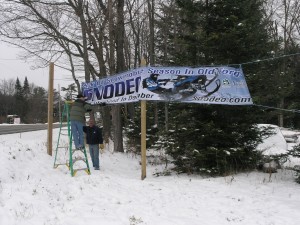 Chip Kiefer (on ladder) and Nick Bankert of the Central Adirondack Association hang a banner to welcome visitors of next weekend’s Snodeo in Old Forge. Photo by Marianne Christy.

With the colder temperatures and snowflakes in the air, one can only think that winter is right around the corner in Old Forge. And with winter comes winter sports, especially snowmobiling.

The 36th Annual Snodeo Weekend is the Central Adirondack Association’s kick off to the snowmobile season on December 7, 8 and 9 at the George T. Hiltebrant Recreation Center.

All four major snowmobile manufacturers will be displaying their 2013 machines as well as offering a chance to win one in this year’s Snodeo raffle.

Tickets are on sale now at the Old Forge Visitor Information Center, at all of the snowmobile dealerships listed above or, new this year, online at www.snodeo.com.