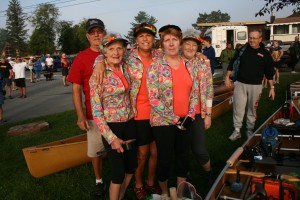 As the sun broke through the early morning fog on Friday, September 7, 275 canoes and kayaks launched from the Old Forge lakefront for the three-day 90-Miler Canoe Classic.

Participants in the iconic race, now in its 30th year, experienced stellar paddling conditions on Days 1 and 3.

However, wind gusts of 40 to 50 miles per hour and rain on Day 2 added more challenge to the already challenging race, causing a reported 25 vessels to capsize on Long Lake.

Among those effected were local entrants Barbara Getty, Sherri Grimm, Patty Foley, and Linda Frank, who were manning a four-person canoe. 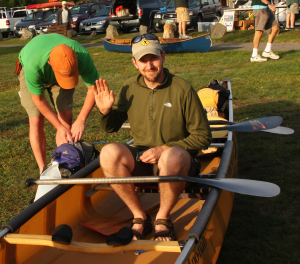 “The wind was pretty bad. For the most part it was behind us and it was actually pushing us, but all of a sudden a big gust came up and turned us sideways, and once you go sideways, you’re done. It picked up our 22 foot canoe and rolled us over,” Getty said.

Race Director Brian McDonnell said the entire race course is closely monitored by safety boats and radio communication, and safety boaters were quick to respond to those experiencing trouble on Long Lake, corraling them to the right side of the lake.

“We started 269 boats on Saturday at Long Lake. About three miles in, eight boats came out when the boaters knew their boats would not handle the wind gusts,” McDonnell said. 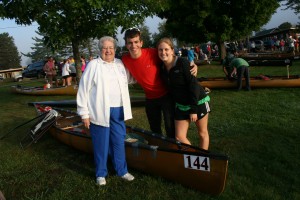 Despite the difficulty paddlers had on Long Lake, McDonnell said the race was completed at Lake Clear in record time, which allowed for more participants to stick around for the post-race festivities and awards ceremony.

All but 25 boats finished the race he said, which is within the ballpark average of finishers for the last 30 years of the race.

“We had two beautiful weather days and one challenging day. A lot of stories will be told by paddlers and safety boaters alike, about what happened on Long Lake. But as the old saying goes, ‘Nobody ever wrote a story about a calm sea,’” McDonnell said. 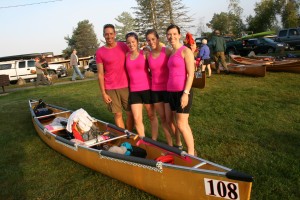 His team finished the three-day race in 11 hours, 48 minutes and 20 seconds.

Ray Morris of South Glens Falls, the sole participating paddler for all 30 years of the Canoe Classic, and his daughter Jodi Tanner of Gansevoort, finished with a time of 20:46:42. 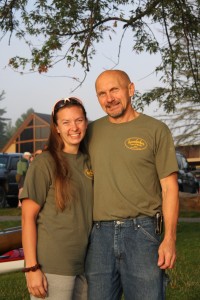 Local paddlers who made it to the finish line after three days of paddling included: