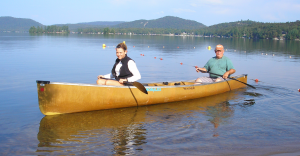 Among the 275 vessels launching from the Old Forge Lakefront on Friday, September 7 for the 90-Miler Adirondack Canoe Classic will be a two-person canoe, manned by Ray Morris and his daughter, Jodi Tanner of South Glens Falls.

Morris’s boat will have the honor of sporting the #30, in commemoration of the 30 years of the iconic race of which he is the sole event-long participant.

Back in the summer of 1982, as a postal worker with the South Glens Falls Post Office, Morris was thumbing through a copy of the Albany Times-Unionnewspaper when he came across a story about the inaugural Canoe Classic. 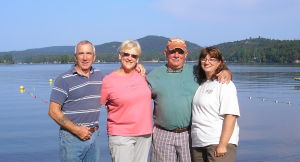 Mike and Sue Lyford of Inlet, and Ray and Helen Morris. Mike and Ray are lifelong friends who grew up together in South Glens Falls.

Intrigued with the idea of the challenge, Morris, a self-confessed non-paddler, suggested to a reluctant co-worker that they take a stab at the race.

After a few beers at a local tavern, Morris convinced his friend to participate.

A month later, in a 16-foot rental canoe from the Blue Mountain Boat Livery, the duo shoved off for the first race.

“We achieved our goal by finishing,” Morris said with a laugh.

It was to be the first—and last—canoe adventure for his friend, but Morris kept at it.

The second year of the race, he paddled with his son, Ray Jr. and came in second place—the closest he’s come to placing big in his class.But it’s not about the win for him. It’s about the overall experience and the opportunity to share it with other paddlers—especially his own kids.

In the past, he’s also competed with another daughter. This year marks the 17th year of participation by Jodi.

And it seems as if the Morris 90-Miler legacy will continue into the next generation, with four-year-old granddaughter Ashley foregoing her first days of kindergarten to wave goodbye to her mom and grandpa as they launch into Canoe Classic history.