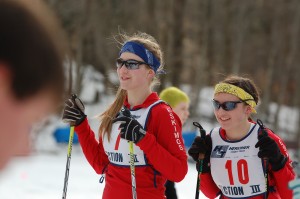 John Leach is coach of the both teams.Members of the team who have qualified for advancement to the Girls’ State Nordic Championships are Maddie Phaneuf, Megan Greene, Andrea Frey, Allison Brosemer and Olivia Phaneuf.

The boys who will be moving on to the state competition are Adam Luban, Colin Criss and Tecwyn Williams.