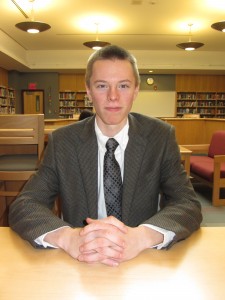 Town of Webb senior Mark DeVoldre, 18, has lived in Old Forge all his life.

In the fall, he said he plans to enlist in the Navy.

“There are a lot of benefits that come along with it,” he said.

Mark said he was impressed with the Navy recruiters that he spoke with, as to the opportunity.

“I wasn’t really looking in that direction at first; they gave a presentation and it won me over,” he said.

Mark anticipates he will be going through basic training in Chicago.

He doesn’t have a favorite class; he said he likes them all the same.

His favorite teacher is Mr. Kinney.

“He’s very laid back and he’s a really nice guy,” he said.

Mark played basketball and soccer for the Town of Webb and competed on its track and field team.

“Basketball is my favorite. I’ve been playing since I was about five years old,” he said.

He was a member of the Stage Crew in the Webb Drama Department’s spring production of “The Pajama Game.”

He is also a member of Drama Club.

Outside of school, he said he enjoys relaxing, watching TV and studying.

In the summer, he likes to be out on the lakes with his friends.

Mark said he likes to listen to all genres of music, but his favorite is alternative.

John and Deborah DeVoldre are his parents.

John is currently employed at Fastrac in Old Forge, and Deborah works at Kinney Drugs in Old Forge.

During the summer, Mark works at Tickner’s Canoes in Old Forge.

Mark has one dog that he said he will miss a lot when he leaves town for the Navy.

He said working for the Tickners is what he is going to miss most when he heads out from Old Forge.