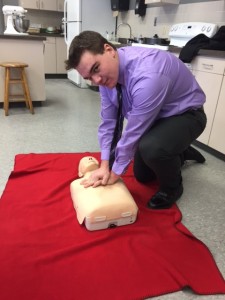 Town of Webb high school students are now required to have training in hands-only Cardio-pul-monary Resuscitation (CPR) and the use of an Automated External Defibrillator (AED) prior graduation.

New York State made this effective on October 7, 2015.

CPR and AED have always been taught as part of health class, according to Webb teacher and CPR certified, Diane Amos.

“We’ve never done the [hands-on] training, we only discussed the topics in class,” she said.

Diane was certified to teach the training about eight years ago, she said.

She said the school started offering a new food science class and by the end of the class, she went through CPR and First Aid and AED.

“[In that class], I certified the kids with the American Red Cross, so they have CPR, AED and First Aid,” she said.

Diane said she is the only one certified in the school to give the training.

“I also go through the training with our coaches; which is nice because I’m right here. Before, they had to pay someone to come in and do it,” she said.

The training is now during the health class that Diane teaches.

Since the new requirements started this year, Diane said students that had gone through the health class in previous years had to come in separately for proper training.

It usually takes from thirty to forty minutes, she said.

“I never took the time to have them do the compressions in health class—really do a thorough job of it,” she said.

She said during the training, the students were performing the compressions on a dummy.

“This way, they are at least familiar with it and able to do [CPR] in case of an emergency,” she said.

“We talk about the AED, what it does and signs of cardiac arrest; they had to practice it,” Diane said.

Diane said most of the kids have been highly receptive to the training.

“They have been really into it; they’re asking questions and seem very intrigued,” she said.

Some of the students are already certified through the local fire departments, a BOCES class, and some from working at Enchanted Forest/Water Safari in Old Forge, she said.

Diane mentioned how great it has been having Inlet Police Chief Andrew Kalil come to a couple of the classes.

“He was on the ambulance services for years, and being a police officer he has responded to a lot of scenes and has had to do CPR a lot. He has really added the extra ‘real life’ thing to it—It’s been really nice. We are really lucky that the school has kept him here for the programs,” she said.

Town of Webb Super-intendent Rex Germer shared a video with Diane that depicted a real life scenario of a female student going into cardiac arrest during a high school volleyball game.

The faculty and staff involved had been properly trained in using AED devices and CPR and most likely saved her life before the emergency personnel arrived.

“You just never know when you may need to perform it,” she said.