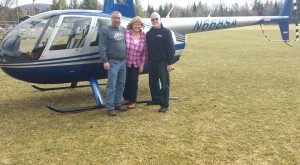 Keith and Denise Wenhold and Tom Bamford take a helicopter ride at this year’s Snofest.

The Snofest Committee co-chairs, Dave Etsen and Sandy Booton, would like to thank everyone who came to the George T. Hiltebrant Recrea-tion Center on March 11 & 12th.

The event was well attended, even without the usual amounts of snow.

We would like to thank all our volunteers who spent many hours at the pavilion making sure the event was a success: Diane Amos and the Town of Webb UFSD Key Club Kids, Gary Staab, Andi Smith, Ed Booton, Dale Heroux, Maryann Jablonsky, Joan Breisch, Joe Etsen, Mike Farmer and Laurie Barkauskas.

Snofest is a partnership between the Central Adirondack Association, Town of Webb, Arctic Cat, Polaris, Ski-Doo, Yamaha, and North-South Connection. Without their support, as well as all our other vendors, guests, volunteers and community members these CAA events could not happen.