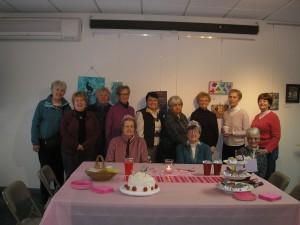 Following a Pointed Pine Quilters luncheon at the home of Barbara and Reed Proper on February 23, Louise Watson and Pauline MacDonald thought they would be spending their usual Tuesday afternoon quilting at the Old Forge Library.

But when they arrived at the library they were surpised to see it festively decorated and filled with family and friends who had gathered to celebrate their respective birthdays.

Louise and Pauline are neighbors and longtime Thendara residents. Louise celebrated her 90th birthday on February 19 and Pauline’s 91st birthday was February 22nd.

Among those who dropped by to offer birthday wishes was Char Pylman who recently turned 90 herself…but she had to dash because she was on her way to another engagement.