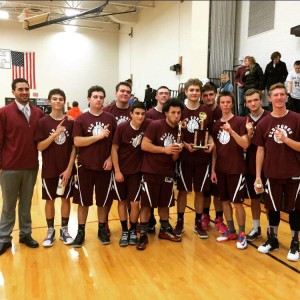 The Town of Webb boys varsity basketball team will be facing Hamilton in their first Section III, Class D sectional game in thirteen years on Friday, February 12th at 7 p.m. in the Webb school’s gymnasium.

“Our regular season record had us in the top eight [12–8], which qualified us for a home game,” said Webb Head Coach Thomas Greco.

“It’s a great opportunity for both our players and fans, being able to compete on our home court,” he said.The team has come a long way in the past two years. In 2014, Webb was unable to field a boys varsity team. Last year, when they resumed competition, the team struggled to a 0–19 record.

“The kids were pretty discouraged. But they came back out and rededicated themselves to the team,” Greco said.

Many on Greco’s team closed out a successful soccer campaign in the fall.

“They were driven to work hard and be successful in basketball as well. They came in ready to work for it,” he said.

The team boasted some size for a small enrollment school. Combine that with the team’s athleticism and Greco thought his team could hang around in games and be competitive. Maybe win a few games.

“Our approach was to lock down on defense, create turnovers, and push the ball up the court. We wanted to take advantage of whatever points we could get in transition,” Greco said.

Many on the team started voluntary strength training in October at Old Forge Fitness, Greco said.

“Our approach required players that were in good shape.”

A disadvantage for the team resulted from slim offerings in the form of youth basketball programs. We lacked some useful experience there, Greco said.

“The thing we were able to bring to the court was some really great athletes,” he said.

The youth league experience wasn’t going to happen, Greco conceded. You either have it or you don’t.

Better to focus on a system and get the players organized, he said.

“They had the athletic ability, they just needed some direction—they needed to learn how to play as a team,” he said.

Greco said that, as a coach, he benefited by being able to watch these players from the sidelines the past few years.

“I knew these kids could be pretty good. They had it in them to be something special. Building up their confidence in the pre-season led them to work hard,” he said.

All of the kids played great this year, Greco said.

The team took the trophy at the Adirondack Tournament on Tuesday, December, 29th at Adirondack Central School.

“Our main five starters have been willing to spend time with the juniors on the team. Everybody wants the success to continue, so they are committed to helping the younger guys become better players for the future,” he said.

Greco said every player boosts this team whether they’re on the court or not.

“Everybody’s in it together, and nobody gives up. No matter what the score this year, we have always fought to the very last buzzer.”

This season’s top scorers were Shane Kimball with 394, including 59 three-pointers. Tyler Fenton had 312 points and Quentin Lucas had 197.

The top rebounders were Quentin Lucas with 189; Bailey Dillon with 166; and Tyler Fenton with 95.

Shane Kimball had 75 steals; Cy Barkauskas had 45 and Tyler Fenton, 37.

The top shot blockers were Bailey Dillon with 56; Quentin Lucas with 12; and Tyler Fenton with 7.

Cy Barkauskas led the team in assists with 77. Shane Kimball had 65 and Tyler Fenton, 40.

Greco said he has high hopes for next year’s basketball participants.

“Our participation and interest in the program is shown by the number of youths in the stands at our games, and the number of kids in grades 4 to 6 that are showing up to Saturday morning basketball,” he said.

In the past, the kids haven’t had much confidence in themselves to join the team, Greco said.

“This season completely turned that around,” he said.

If the team wins Friday’s sectional game, they will have to face the third ranked team in the state—Oriskany—who is undefeated.

“We are taking it one game at a time. The way I’m going into sectionals, is we have one game left—Friday against Hamilton,” he said.

“We beat them earlier in the season [at Hamilton] 64-63 on a last second shot by Shane Kimball. When we met again at home, they beat us by 10 points. So this should be a really good game,” Greco said.