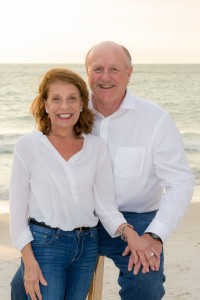 The first item on the February 27 agenda in Inlet will be the crowning of the King and Queen of 2016’s Frozen Fire and Lights at 10 a.m. in front of the Town Hall.

Following their coronation, Greg and Toni Rudd will preside over the various events such as the cardboard sled races and kids snowmobile races at Fern Park, as well as the free hot dog and hot chocolate stand at Arrowhead Park prior to the magnificent fireworks display over 4th Lake.

Greg and Toni were an obvious choice for this year’s royalty. Greg’s parents are Inez and the late Gordon Rudd who ran a Red & White grocery store in Inlet from 1956 until 1990.

So, Greg lived in Inlet for his entire life until he went off to college and then on to a teaching career.

It was while he was teaching high school and elementary Art at Whitesboro that he met his wife Toni, also a teacher but of business and accounting.

They’ve been married for 30 years and raised children Christine, John, Mike, and Julie.

They are also the proud grandparents of Danny, Nicole, Gianna, and Maria.

Anyone attending the Inlet craft show “Arts in the Park” will immediately recognize Toni as the vendor selling homemade jams and jellies while Greg works tirelessly on his potter’s wheel, demonstrating how he turns out his popular pottery products.

The Rudds’ further connections with Frozen Fire and Lights are the great snow sculptures they have erected at past events.

Among the startling creations they have constructed out of snow were a polar bear, a wolf, and Greg’s favorite, a musher sitting around a fire with two of his huskies.

It has been a few years since Toni and Greg, who have a summer home in Inlet but live year round in Deerfield, have had the spare time to do the snow sculptures.

However, having recently retired, they have been discussing getting back into the snow sculpting business for next year’s Frozen Fire and Lights.

Now that’s something to look forward to.

Stop by at any of the Frozen Fire and Lights activities and say hello to Toni and Greg; you’ll recognize them by their crowns.