Did anyone see any snow over the weekend? While we didn’t see any around here, if you were south of Poughkeepsie to South Carolina you saw more than enough for two years.

Records were broken for snow totals in most of the major cities along the east coast and here we are making snow to ski on. 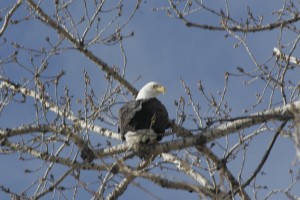 They say there is another Nor’Easter coming along at the end of this week…we’ll see if these cities have made room for this one.

We did have plenty of cold temperatures but it didn’t make much ice as the lakes are snow covered and not freezing under that snow.

I walked across Limekiln yesterday and there were several slushy spots.

Even some of the bare spots that were slush hadn’t frozen overnight and it was minus-12 when I got up yesterday morning (1/24).

I went ice fishing on Limekiln but I waited until about 9 a.m. when it was just above freezing.

I put in my tip-ups and before 11 a.m. I had my limit and threw back three other small ones.

This week I’ve been chasing birds that shouldn’t be here this time of year. Four black vultures were seen and photographed by Ellie George over by Ticonderoga on Thursday. They were feeding on a dead deer not far from routes 22 and 74.

I went over early on Friday (1/22) and spent an hour at the site but the vultures were a no-show that day.

I did go to the Crown Point Bridge to see some ducks but that had frozen over during the week and they weren’t there either.

There were lots of perch fishermen all over Bulwagga Bay and some not far from the new ice.

I saw an otter out on the ice where a stream came in from the south.

I also got some minnows while I was over there at Norm’s Bait Shop, so the trip wasn’t wasted.

There had been a white pelican reported at the Inner Harbor at the outlet of Onondaga Lake in Syracuse for a couple weeks now.

During this week it was reportedly gone so I thought I missed that one also, but on Friday I got a report that it was still around.

With the weather so nice Karen and I took a trip down on Saturday morning and got there about noon.

We missed one turn but came out just where we should have after a couple of backtracks.

I walked over to the Inner Harbor with just my binoculars. There were a lot of gulls and ducks sitting on the ice there but no pelican.

I looked down the outlet and saw cameras pointing down from a foot bridge across the open stream so I knew the bird must be around.

I went back to the parking lot and got my camera.

There was a well beaten path to the foot bridge where everyone was holding a camera or binoculars.

The pelican was right at the entrance of a four-foot culvert that came out into the main stream.

The bird would go back into the culvert where it was finding fish to eat. It came out several times but went back in when it didn’t find any fish in the main stream.

It did this a few times as folks were snapping pictures and new people came to see the bird.

Just before I left the bird came out into the main stream and got in good light for photos before swimming downstream out of sight.

One fella who was there taking shots recognized me and said he had gone on one of my hikes years ago into Beaver Lake in the Plains.

He had also photographed the loon and chick on Moss Lake this summer.

After talking with some of the folks there they said there were a couple bald eagles and some swans up where the stream came out of the lake.

The walkway was plowed all the way and it was over a mile walk which went right in back of Destiny USA.

I bumped into a guy coming down from the lake who said the eagles were out on the ice and the swans were with the ducks in open water off to the left of the bridge.

Just before getting to the parkway bridge over the path the bald eagle sat in a tree not more than thirty feet up.

It let me get quite close and I took several nice shots, some with the sun shining right in its eye. It flew off and landed on the other side of the lake.

There seven swans out swimming with the mallards. Another guy came along and said they were mute swans but I saw two trumpeter swans and five mute swans.

He wanted a photograph of the eagle and said he would have to drive around the lake to see if he could get close enough for a shot.

The Backyard Bird Count will be February 12 to15. Keep those feeders full as the birds haven’t all settled in yet and keep moving around trying to find the best feeders.

You can also take a walk in the woods and count birds there.

The Mike Norris Ice Fishing Contest in Raquette Lake and the Pond Hockey in Inlet are both this weekend… but they are another story. See ya.