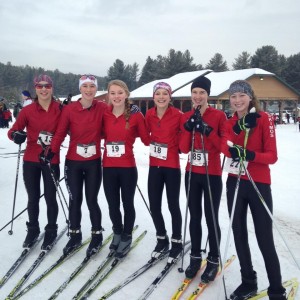 The Queensbury Nordic Invitational was held on Saturday, January 16 at the Gore Mountain Ski Bowl in North Creek, with the Old Forge boys and girls skiers racing impressively.

The competition was also a Junior Nationals qualifier for U18 and U16 boys and girls.

Queensbury finished second with 19 points, and Shenen-dehowa came in third with 41.

Laura Levi crossed with a time of 12:17.3 to finish in sixth overall.

Rachel Smith finished tenth overall with a time of 12:35.3.

Emily Rudolph raced to a second place finish in Junior Varsity competition with a time of 14:40.2.

In the Boys Skate, Henry Uzdavinis took first with a dominating performance. His time of 15:00 bested the next finisher by more than two minutes.

Tyler Rudolph came in fourth with 17:43.