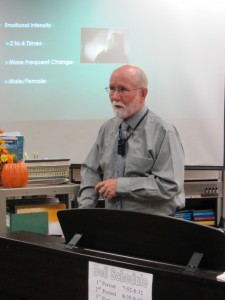 As described previously in this series, brain function issues and and today’s social media lifestyle can cause stresses that lead to depression and sometimes suicide.

In fact, 24 percent of those attempting suicide say that just five minutes lapsed from the time they decided to take their lives to the time of the attempts.

This is according youths who survived their attempts, as reported in a Harvard Public Health School Study.

Another 24 percent said the time from the decision to the attempt was between five and nineteen minutes.

“Fortunately, girls are more apt to tell someone that they are planning on killing themselves,” Nerney said.

He suggested that parents do whatever they can to impede youths from acting on dark impulses.

Of all self-inflicted firearm deaths under age eighteen, 85 percent resulted from a family member’s gun, usually that of a parent, Nerney said.

But depression does not have to end in tragedy, Nerney said. There are many ways to manage the problem.

One way is to offer opportunities for depressed youths to talk.

“In many cases, they want someone to ask them what is wrong,” he said. “Don’t be afraid to act on the parental instinct.”

Nerney also said to notice signs of unhealthy depression in the way youths talk about their futures.

Take caution when they respond with, “It doesn’t matter—it won’t matter” or “Nothing will ever change in my life.”

Also watch for behaviors such as starting to give their belongs away.

“[Those are all] indicators that something is wrong and something will happen in the future,” Nerney said.

Don’t be afraid to be blunt.

If there is any reason to suspect that a child might hurt themself, just come out and ask, “Are you thinking about or killing or hurting yourself.”

This will not put an idea in a child’s head that isn’t already there, Nerney said.

“No research indicates that when some adult says, ‘Are you thinking about killing yourself,’ the kid says, ‘Well, I wasn’t but now that you mentioned it, I am thinking about it,’” he said.

There are a number of help lines available twenty-four hours a day, seven days a week, according to Nerney.

“You can get help online in seconds,” he said.

Nerney said to support a youth every step of the way through their depression—anyway you can—including doing activities with them.

“Get help and get them into treatment; within eight to ten months there is usually a pretty substantial resolution,” he said.

And if you think a youth needs time away from school, take them out, he said.

Unfortunately, there are suicide clusters all over that share the same reasons for depression, according to Nerney.

“They find each other on websites and talk about how poorly they’re treated, and how they’re going to kill themselves, and when,” he said.

Webb parent, Kelly Noonan-Greene, asked if there is a version of this presentation geared for kids.

“I think that would be great,” she said.

Germer said that they wanted to assess the outcome of the awareness night.

“We will be talking after this as to what our next steps are,” he said.

Germer mentioned that there were three suicides in the past fifteen months, and two were youths in the community.

“I have had students come up to me and say, ‘We are just waiting for the next one.’ That is where some of their mind sets are,” Germer said.

“We were very pleased with the turnout for the presentation. Michael Nerney was very informative and the scientific information he shared was very relevant and insightful,” he added.

There have already been some questions about bringing Nerney back for future presentations, Germer said.

The presentation of the Awareness Night is on a YouTube channel and is linked to the Town of Webb webpage and their social media outlets.

“[This will] allow those interested in the information…to hear it on their own, if they weren’t able to attend the night of the presentation,” Germer said.