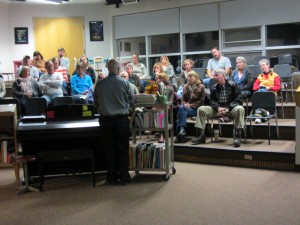 Parents and community members at the Awareness night held at Town of Webb school. Photo by Gina Greco

The talk was led by Michael Nerney, a consultant in Substance Abuse Prevention and Education with over 35 years experience in the field.

This was not Nerney’s first visit to the Town of Webb, having presented a program  several years ago at a VIEW.

Audience members at that session encouraged his return.

Nerney described the primary reasons for people taking their lives. They include drug and alcohol problems, he said.

He explained to the group the differences in the male and female brains of young adults.

“There is no indication that the male and the female have more powerful emotions; they just have emotions about different things,” he said.

The brains are not the same, so it doesn’t help if they are treated the same way, he said.

According to Nerney, the way males and females show their depression is very different.

Girls don’t want to socialize, he said. They stop caring how they look and have trouble sleeping and eating.

“Studies have shown that when fourteen-year-old girls are showing signs of depression, 80 percent of them had mothers that were depressed,” he said.

The most effective treatment for those girls was to treat the mother for depression, he said.

When girls feel too stressed, they most likely break down and cry.

“Crying is an efficient stress reduction technique. In our brains we make a chemical that shows up as a product of human tears. Crying is helpful in managing physical, social and emotional pain,” Nerney said.

“Both sexes cry about the same until about age eleven.”

After the age of eleven, the boy’s brain stops making the chemical for tears, and they don’t get the same advantage from crying as they did growing up, Nerney said.

When boys are overwhelmed with stress, they tend to flee the scene or don’t show up. They are restless, agitated, angry, and resentful, he said.

“They often engage in high risk behaviors, where they are vandalizing things. They might be driving 150 miles per hour; they don’t care,” he said.

Some children are known as Impulsive Aggressive Reactors.

“These children do not start trouble; but if trouble comes, you will see a powerful, overcharged, over-the-edge response to that trouble,” Nerney explained.

Emotional intensity in teenage brains is two to four times greater with more frequent changes than adult brains, he said.

Nerney described how much physical appearance plays a large role in how the individual feels.

He said that, for kids, there is a relentlessness in their comparing themselves to other kids, especially with how they look.

“Kids that are targeted for their appearance are four to five times more likely to suffer from depression and suicidal thoughts,” he said.