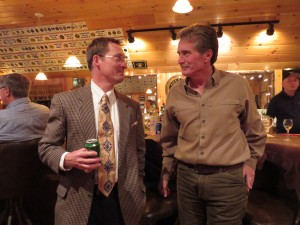 In the second time in four years, Town of Webb voters will have to wait until absentee ballots are counted to determine the winners in races for supervisor and town council.

Unofficial results show that only two votes separate supervisor candidates Robert Moore and H. Stuart deCamp, with Moore receiving 395 votes (331 in Webb District 1 and 64 in District 2) to deCamp’s 393 (347 in Webb 1 and 46 in Webb 2.)

Barbara Green was the only clear unofficial winner in the race for two council seats having received 480 votes, 410 in Webb  and 70 in Webb 2.

MaryAnn Nelson, a member of the Town of Webb Republican Committee, said these were the closest races she has seen in her 29 years on the committee.

A total of 825 voters went to the polls, 708 in District 1 and 117 in District 2. And according to Herkimer County Board of Elections Commissioner Louis P. Christie, 87 absentee ballots were sent out. The ballots need to be postmarked by November 2 and received by November 10 to be included in the count.

Review of absentee and affidavit ballots begin on Tuesday, November 17 with recanvassing of ballots beginning the following day.

Christopher Farber will serve another term as Herkimer County Sheriff, winning both locally and county-wide.