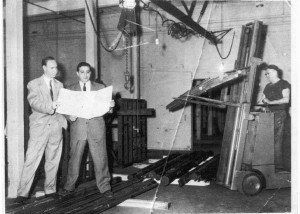 Gene at Pacemaker Steel…Romano still in his 20s, second from left, works on perfecting his steel and piping operation in Utica.

Malio J. Cardarelli, author of F. Eugene Romano; Doing it His Way, said this is his most in-depth work, more so than any of his other 18 releases, which cover local history mostly in the Utica area. 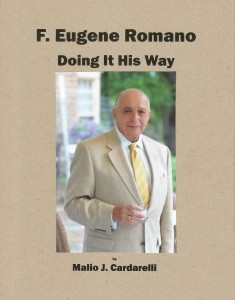 It covers the extraordinary business achievements and much of the personal life of Francis Eugene Romano who, although in his upper 80s, continues at the helm of his six-decade-old steel and piping business in Utica, along with many of his other investments.

Romano’s entrepreneurial urges started at age 12, when he established an out-of-town newspaper business, selling the Sunday New York Times to parishioners after mass at Our Lady of Lourdes church in South Utica.

The venture expanded to home delivery of several Sunday editions of out-of-town papers, sufficiently widespread that he needed employees, and sufficiently valuable that when he moved onto other things, the business was not simply abandoned, but sold—this while still in his early teens.

Of all his endeavors, perhaps the most rewarding and certainly the most glamorous was his hotel-casino in San Juan Puerto Rico that began as a Howard Johnson Hotel.  Under Romano’s guidance and untiring efforts, it was transformed into one of the finer hotels in San Juan and to which he later added a massive addition to hold a casino and luxury suites.

Receipts from the sale of the hotel-casino along with the continuing profitability of his other endeavors, especially his Pacemaker Steel and Piping Co., has brought him much financial gain, and he has generously shared his fortune by helping to enhance or retain a number of educational and cultural activities in the Utica area.

F. Eugene Romano; Doing it His Way is available for sale at a number of Utica locations:  The Oneida County Historical Society, the Gift Gallery at Munson-Williams-Proctor Art Institute, Chanatry’s Market, the Shoppes at the Finish Line, and the Clubman Barbershop.

Suggested retail price is $21.95. It can also be ordered from the author via:  www.BooksByMalio.com