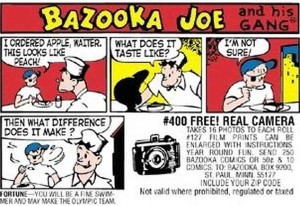 Having chewed great amounts of bubble gum in my youth, I thought I might reflect on the many great fellow bubble-blowers at the Inlet Common School in 1977.

Though gum chewing was not allowed in class, we all seemed to find a way to get a few pieces—sometimes as many as five—into our mouths for extreme bubble blowing.

I preferred the classic Bazooka bubble gum that came as a single piece wrapped in a comic.

At first it was hard to chew, but the bubble was rigid and tented to stay up and not sag.

Some of my classmates, such as Sheri Hazen, preferred the soft-style Hubba Bubba when she tried out her classic “bubble blown inside a bubble” trick.

Getting the contraband into school was a very simple affair as we were kids with things in our pockets.

The boys and girls all wore chamois shirts during the winter which provided ready-made front pockets with ample room for at least two packs of gum.

If a teacher was on the prowl to rid us of our gum and we were made to spit it out, chances were that a new piece was always at the ready.

Blowing a bubble while the teacher was at the blackboard took not only skill but timing.

There was nothing greater than watching your classmate inflate a good-sized bubble and then suck it back in just as the teacher turned to look for a volunteer, or victim, to answer the question about sentence structure.

I never had the courage to attempt that feat, as due to my preferred gum brand my bubbles seemed to always pop loudly and surely I would get caught.

During recess, Rich Suba would scoot downtown with the nickels and dimes he colliected from us and hit Kalil’s Department Store for new supplies of gum.

It seems like only yesterday that I was unwrapping a few small two-cent pieces of gum.

It was almost a given that the wrapper would stick to the gum’s pink sugary coating.

Then I would read the Bazooka Joe comics that were almost funny.

But the best part for me was collecting the wrappers for points towards free stuff listed small in the lower right hand corner…#400—a real camera!

I never collected enough to actually trade them in for a prize, mostly because they were in my pockets when my clothes went through the wash.

To this day I still remember fondly the sweet taste of that gum.

And the taste was made even sweeter with the great Hubba Bubba Spider Egg hoax of 1978.

The story spread like wildfire and had kids from all over talking about it…even here in our small Adirondack Mountain school.