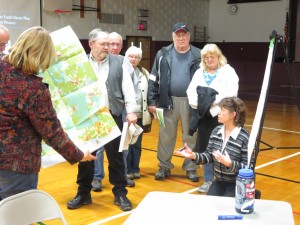 On Monday, November 24, Old Forge hosted the best attended of four public meetings that were hosted across the Adirondack region recently by the Adirondack Park Agency (APA), according to agency representatives.

The purpose was to hear public ideas about potential changes to the Adirondack Park State Land Master Plan (APSLMP).

Among those participating were Inlet Councilman Bill Faro, and Bob and Linda Gordon, members of the Inlet Barn-stormers Snowmobile Club.

They described a need for the APA to allow an increase in width of certain snowmobile trails to a full twelve feet, safety being the primary concern.

“The snowmobile trails should definitely be wider. There should be enough room for the groomer on one side and a snowmobile to pass safely on the other,” Councilman Faro said. 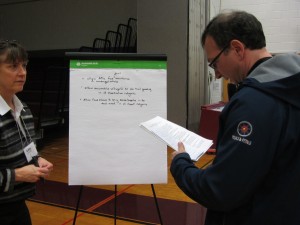 Ted Christodaro of Inlet and Kathy Regan of the APA. Photo by Gina Greco

The Adirondack Park currently has classifications allowing for 12-foot or 8-foot trails, depending on their locations.

The safety on several of these 8-foot trails could be greatly improved by the allowance of additional width, said Dick Bird of Old Forge and Raquette Lake.

Bird is the president of Adirondack North Country Association’s (ANCA).

Another concern involved  the need for uninterrupted cell coverage throughout the region, including off-road.

“We need a cell tower, not just for the Route 28 corridor. I’d like to see them allowed on the wilderness areas. There should be cell coverage everywhere,” Council-man Faro said.

The Park’s Master Plan should make enhanced safety its highest priority for those that reside in the Park and are active in the Adirondack Park experience, Dick Bird said.

For the safety of hikers, sportsmen and others who travel the woods, there should be cell reception everywhere, he said.

Float plane access needs to be restored to lakes, where it had been restricted in recent years, according to Tom Payne, owner of Payne’s Seaplane in Inlet, and several others.

The restrictions have closed off these areas to hunters and tourists, who had historically accessed them using local float plane operators.

“We’re down to two float plane businesses in the area. They’re getting pushed away, not being allowed to land in lakes in the wilderness areas,” said Councilman Faro.

Faro said he has noticed the effects firsthand, as a resident of Seventh Lake.

“I see the planes coming and going on the lake all the time…this year, it was quieter. I’m not sure why, but I know with the restrictions of landing, it’s not helping out local businesses. It’s a chain reaction, the businesses are linked together,” he said.

Dick Bird said there has been talk of improving the float plane landing situation in the Adirondacks, but action has been slow.

“They have been promising to open up lakes for the planes since they closed access on Lows Lake,” he said.

Another concern of Bird’s relates to diminishing road access in the event of an emergency.

He said the state should consider keeping the jeep trails and old log roads open in case of forest fires.

“They already are closing a lot of them,” he said.

The susceptability of this region to damage by invasive species was also brought to the APA’s attention by Bill Faro and others.

“The last State Land Master Plan was put out before invasive species became an issue in the Adirondack Park. There should be something in the new plan to address the evasive species problem, both aquatic and land,” he said.

Faro said he had the opportunity to discuss the issue at length with Kathy Regan, the APA’s Deputy Director of Planning. She agreed fully, he said.

Ted Christodaro, owner of Pedals and Petals Bike Shop, in Inlet, brought his concerns about biking in the wilderness areas.

That would involve some wording changes to the Adirondack Park State Lake Master Plan.

Areas surrounded by wilderness property would have more opportunity for recreational activity, if they were to allow bicycles in those areas, Christodaro said.

“I think there can be smarter choices to the use of land,” he said.

Christodaro also offered comment on the rails to trails controversy.

“If the rails were made into trails, it would benefit everyone,” he said.

The system is so big, it would be a positive asset to a large group of communities, he added.

“I’ve had a lot of customers in my shop this summer talking about how they would plan their vacations around the rails to trails. It would impact a lot of people,” he said.

“That would be the largest impact of converting over to a trail system. Our winter season would lengthen for snowmobiles, and we would be bringing in riders from all different areas,” he said.

Christodaro would also like to see snowmobile-drag usage allowed to groom cross-country ski trails throughout the Adirondack Park.

Restrictions should be eased for allowing better trail clearing and maintenance with four-wheelers and chainsaws, he said.

Proper equipment would lessen the man-hour requirements, according to Christodaro.

“The state is spending too much money on trail maintenance because we’re using so much man power. If we had the right equipment, cost would decrease,” he said.

Overall, Councilman Bill Faro said he found the APA session in Old Forge to be positive and informative. It was a great chance for community members to speak directly to APA representatives about local concerns, he said.