The Town of Webb has been selected to receive the 2014 Environmental Project of the Year Award from the Central New York Branch of the American Public Works Association (APWA). 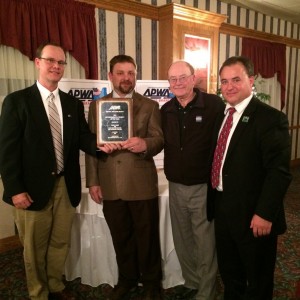 The award is in recognition of Webb’s recent East Side Pump Station and Force Main Upgrade Project.

Town Supervisor Ted Riehle was on hand to receive the award, on behalf of the Town of Webb, at the Branch’s Annual Banquet on November 13.

The banquet was at the Rusty Rail restaurant in Canastota.

“[These are all] individuals committed to excellence in the public works field,” he said.

Riehle said he is pleased at the town’s having been selected.

“It’s always nice to be recognized,” he said.

“The Town of Webb has been taking a proactive approach with our asset management program, and the Pump Station was identified as needing to be addressed. So, this award was tied into that project,” Riehle said.

The East Side Station with its early-’60s era pump, and the associated force main infrastructure, had gotten to the end of their useful life cycle, according to Riehle.

“In our analysis and planning in the sewer district, that came to the forefront. And the town of proactive in getting it fixed before a more serious problem occurred,” he said.

Riehle said not all towns operate in such a fashion.

“They run something until it’s completely failed, until they’re under a consent order to act. And that’s not a good way to operate,” he said.

The APWA clearly agreed that Webb’s infrastructure handling was worthy of recognition.

“Our method allowed us to plan, prepare and finance properly. There’s something to be said for that,” Riehle concluded.