All were invited to a birthday party at Lakeside Terrace Apartments in Old Forge to celebrate with five women residents who are in their nineties. 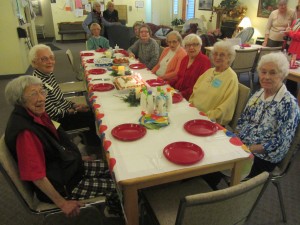 Ms. Maio is one of Lakeside Terrace’s original tenants, having moved there in 1989.

Virginia Hesse, 95, also an original tenant from 1989, moved out of the apartments earlier this October.

“They all had a great time,” said Joyce Leszyk, Lakeside Terrace’s Site Manager. “We’re very proud to have five residents in their ninth decade.”

“Brenda brought her ukulele to the party; she was singing and playing for everyone. She wasn’t feeling well all day, but when she arrived to the party, she was in great spirits,” Joyce said.

Ruth Brussell, a retired Home Economics teacher from Town of Webb UFSD, made the cake for the occasion.