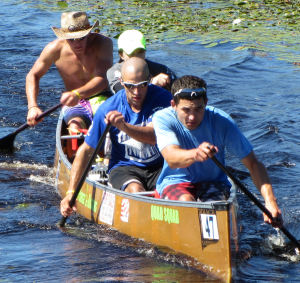 The Adirondack Canoe Classic—The 90-Miler—will be celebrating its 32nd year as paddlers depart from the Old Forge Navigation Dock on Friday, September 5th.

The three-day race ends at Lake Flower in the Village of Saranac Lake on Sunday, September 7th.

The event takes paddlers of guideboats, voyageur canoes, kayaks, and solo, tandem and four-person canoes through the lakes, rivers and ponds of the original “highway of the Adirondacks” traveled by early settlers and guides.

The race is limited to 275 vessels. 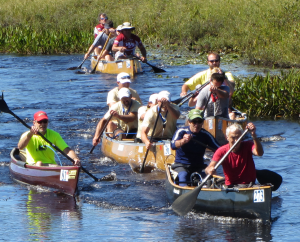 Registrants range in ages from 10 to 80-plus with numerous participants from the local region as well as folks from across the country.

Everyone who completes the three-day paddle will be awarded a mileage pin.

After starting off in Old Forge, paddlers will follow the Fulton Chain of Lakes up through Eighth Lake, to Brown’s Tract, across Raquette Lake to St. Huberts Bay, up the Marion River across the railroad grade to Lakes Utowana and Eagle to the finish line for the first day at Blue Mountain Lake. 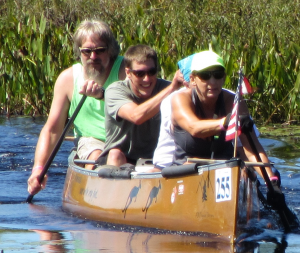 They carry their boats from Fifth to Sixth Lakes, Seventh to Eighth Lakes, Eighth Lake to Brown’s Tract and across the Marion River Carry.

The distance for Day One is 35 miles.

Day Two begins on Long Lake. Paddlers go off in waves toward the North end of the lake, following the Raquette River down to the DEC Fishing access east of Tupper Lake.

There is one carry near Raquette Falls.

The approximate distance for Day Two is 25 miles.

Paddlers cross Square Pond, go down Fish Creek to Upper Saranac Lake, across Middle Saranac, through Lower Saranac Lake, down the Saranac River, across Oseetah Lake to the Finish Line on Lake Flower in Saranac Lake.

The approximate distance for Day Three is 25 miles.

Local paddlers registered for the 90-Miler include:

For the past 17 years, the 90-Miler has been organized by Race Director Brian McDonnell, and his wife Grace, of Lake Clear.

Sponsors of the event include regular supporters:

All are welcome to witness the send-off of boats at the Old Forge lakefront on September 5th. The first wave exits at 8 a.m.