While treating a swampy area on the south shore of Third Lake with Bti on Tuesday, April 22, Ryan Thompson of the Town of Webb Bti crew spotted a moose in the distance. When he and a fellow worker went to take a closer look at it, they saw that its tracks led out to a point, onto the sand and out into the water. 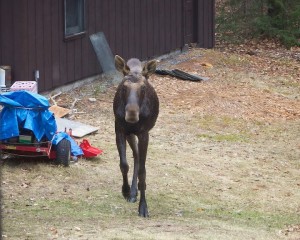 Local photographer Clark Lubbs captured this image of a moose in his back yard.

“It swam across the lake towards Tuttle Road,” Thompson said.

And that’s where the story picked up later that day…on the north shore of Third Lake in the back yard of local photographer Clark Lubbs. 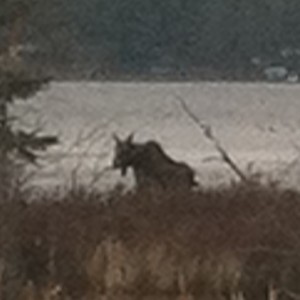 Lubbs said the moose—which measured about five feet at its shoulders—took its time meandering around the property before casually making an exit.