Snofest 2014 organizers were grateful that snow remained on the ground long enough for snowmobile enthusiasts to test drive 2015 sleds during the event held three weeks ago. 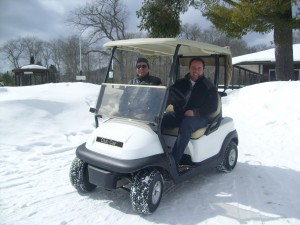 But the lingering winter was not so kind to Dave Neuser of Mid-State Golf Car as he brought a new Club Car golf cart to demonstrate at Thendara Golf Club on Wednesday, March 26th.

Neuser, territory manager for the Cicero-based company, said he has faced some weather-related test drive challenges in the past, but the combination 14-degree air temperature/below zero windchill/snow-packed surface situation he was presented with at Thendara was a new one for him.

“The golf course is scheduled to officially open for the season on May 3rd. If winter hangs in until then, it’s good to know there’s a cart that can stand up to the elements,” joked Foley.