The Town Board, having approved the measure on Monday, February 3, has begun installment of an indoor soccer facility at the George T. Hiltebrant Recreation Center on North Street. 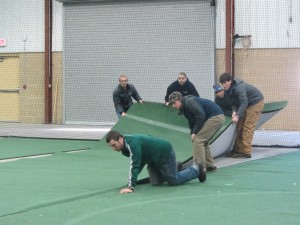 Jason Perkins, Town of Webb Recreation director, said as of now, providing everything goes as planned, the field will be up and running and available for use next week.

A number of volunteers have helped all week long, having laid down more than half the turf and hung two of the six sections of netting.

Construction of the field resumed Thursday evening with many more volunteers on hand.

The facility will be disassembled during special events that include Snodeo, Pink Ribbon Riders, Snofest and Polkafest.

“It’s not just for soccer,” Perkins indicated, as he described plans he has for a flag-football league. 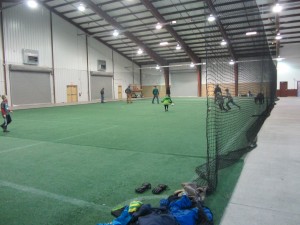 That use of the facility is currently pending approval of the board.

There are no plans for any leagues to start until after Memorial Day weekend, when the Hiltebrant facility will be used for the annual Polkafest event.

Open hours for use from now until Memorial Day will be finalized and posted next week, according to Perkins.

He said he is hoping for open hours for adults during the week and youth open hours on weekends.

That could change, however, depending on when the participants are available.

Everyone is welcome to play on open nights as long as they sign one of the waivers, that will be available on-site.

Those with additional questions can contact Jason at (315) 369-5269 or townofwebbrecreation@gmail.com