What a fall week it was with cool mornings, warm days and only a spattering of rain. We made up for it this past weekend, but it was getting dry.

Many of the leaves are on the ground now. Most of the color is gone except for the brown beech leaves, the yellows of the birches and tamaracks, and the red berries on the mountain ash. 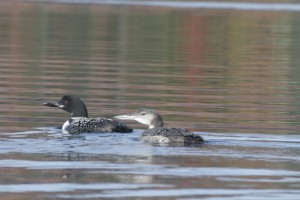 The birds are on the move and the local birds are feeding on the abundant crop of berries and nuts.

Everywhere I went this week I heard blue jays working their way through the beech nuts which seem to be in an endless supply.

Karen and I walked to the outlet of Limekiln and the roads in the campsite were covered with the hulls of the eaten nuts.

Every bird and animal in the woods will use this supply of nuts on the trees and on the ground once they have fallen.

Many times I’ve seen evidence of where bears have climbed trees and harvested the nuts.

They leave behind big piles of branches after they have eaten the nuts, which I call bear nests.

They also do this to black cherry trees when there is an abundance of fruit. 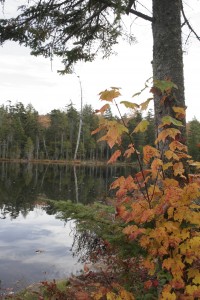 I fished every day this week—even if it was just a few casts in my pond in the morning to wake up the fish.

This morning (10/6) I went to Eighth Lake to try for rainbows. I trolled with red and yellow streamer flies and they liked it.

It’s been a long time since I’ve tried this, but the fish didn’t forget and neither did I.

In 1969 when we were building the group lean-to on Eighth I would go up early in the morning and catch a few rainbows before we went to work.

The season back then was over at the end of September but now you can fish there until the fifteenth.

One morning, near the end of the season of ‘69, I had over twenty fish one morning.

I landed four that were 18 to 20 inches just by flat lining with my spinning rod.

This morning I caught two nice rainbows that were 14 to 16 inches—and lost two—in a little more than an hour.

I used the same streamer that I’ve retied red feathers on several times with my fly rod and a sinking line. 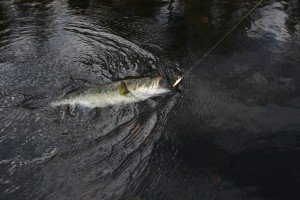 There were three other boats out on the water that only had two fish, so I think some of these fishermen will be looking for a red streamer fly in their tackle boxes before the day is over.

Another day I went to Big Moose Lake and lost more fish than I caught. Some big ones got away.

The loon family from the north bay of the lake was out in the main lake with their chick and still begging for food.

It won’t be long before the adults fly off and leave junior to fend for himself.

The chick was giving muted male calls but he hasn’t got it down yet.

The pretty black and white feathers the adults had preened from themselves were all over the surface of the water.

One adult looked like it had juvenile or its winter colors. The other, an adult female, was starting to gray up but still had a long way to go.

The lake was calm so I got some good photos of the whole family and even some of the floating feathers on the water.

One big feather had a drop of water floating on top of it as it sailed across the surface of the lake.

Speaking of loon calling, a loon calling contest will be part of the Adirondack Loon Celebration at Paul Smith’s VIC on Sunday, October 13.

The celebration runs from 9 a.m. to 5 p.m. and admission is free. Other events will take place throughout the day.

For more information or to purchase tickets for the loon quilt raffle go to adkloon.org.

The same day I went on Big Moose Lake I also walked into Russian Lake, a place I had never been. I met a couple there from Sodus and we had a nice chat.

I had met the gentleman once before at Ferd’s Bog when I was with a birding group. We walked out together after I had taken a few photos of the lake shoreline.

We flushed a couple grouse while walking out and saw a neat northern ringneck snake that was sunbathing in the trail.

As we parted ways I told them about the nice colors up the inlet of the lake where they were about to canoe.

I caught a four-pound largemouth bass before I lost sight of them.

It actually took my plug off a stick that I was hung up on and gave me quite a battle.

It took me under a big log but my line held and I got it to the boat for pictures before releasing it.

I hit a couple brooktrout ponds this week. The fish were still biting on my Hornberg fly which is supposed to look like a crayfish—and I guess it does.

These male brooktrout don’t get any prettier than they are this time of the year in their spawning colors.

A visit to the Adirondack Loon Celebration, but that’s another story. See ya.