When Sherry Grimm’s visiting family suggested an afternoon hike on the trails of Inlet’s Fern Park on Sunday, September 29, she was anxious to oblige. After all, the trail, which can be seen from her Inlet hilltop home, is a favorite of the outdoor-loving gal.

As they pulled into the parking area, Sherry was hesitant to get out of the car after seeing a large crowd of people near the trailhead. She didn’t want to disturb them because she thought they were having a party for someone. 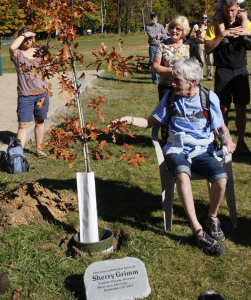 She was right…and the guest of honor had just arrived.

Sherry’s friends, approximately 150 of them representing various circles of influences from her life, gathered in her honor to dedicate the newly named, “Sherry Grimm’s Dream Trail.”

A tearful Sherry had a hard time finding the words to describe the dedication.

“I have never been speechless before—I still can’t believe it. I spent the morning with my family, hiking and ended up at Golden Beach. I laid on the beach and was sound asleep one hour before going to Fern Park,” she said.

Sherry, who has been living with cancer for the past few months, said the low main trail at Fern Park is something she hiked or skied daily—even if she had to carry her oxygen along with her.

“I don’t know anyone, other than Walter Schmid, who spent more time skiing on that trail,” said friend and fellow paddling enthusiast Patti Foley. 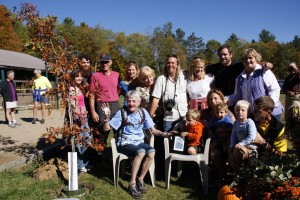 A permanent dedication plaque, carved by her friend and mentor, artist/carver Mike Bloomquist, will mark the trailhead.

The event was organized by friends Stuart deCamp, Jimmy Ortiz and Victoria Brazell.

“She is such a non-discriminating person who has opened herself and her home to stray animals as well as humans who are down and out. We really wanted to do something special for her that would reflect her love of life and nature,” deCamp said.

deCamp said Inlet Town Supervisor, John Frey, and the Town Board were quick to approve the trail dedication and the planting of an oak tree in the park in Sherry’s honor.

“We thought it was appropriate to plant an oak tree that, like Sherry, will grow tall and strong—not perfect, but will weather a storm,” he said.

The plaque by the tree reads: This tree is planted in honor of Sherry Grimm. Explore, Dream and Discover. Share your Blessings. September 29, 2013.

Sherry expressed gratitude to deCamp, Ortiz, Brazell and the Egenhofer family, as well as all those who came to share in her special day.

“I came here 20 years ago and it’s these people who have made me who I am. I am so sold on them that it blows my mind. I have never been happier in my life,” she said.

Foley said the day was made even more joyful with Sherry’s family present to witness the outpouring of love of those whose lives have been touched by her.

“It reminds me of the proverb, ‘Shared joy is a double joy; shared sorrow is half a sorrow,’” she said.