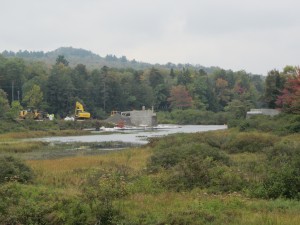 In the meantime, they will be continuing with the rest of the project—the path along Route 28—which itself had experienced a hold-up.

Riehle said National Grid was prompt in relocating their utility poles when necessary, but a pole used by Frontier and Verizon was moved at a more leisurely pace.

“The [project] engineer was placing calls, and I placed a couple calls…it just finally got done,” Riehle said.

Riehle said the contractor was not going to come in with the paving crew and do the finish grade until the pole was moved.

“We should see some better progress on Route 28 now,” he said.

As for the welcome center/ public restroom building being constructed in Eagle Bay… that project has been dragging according to Councilman Mike Ross, who said he’s been monitoring its disappointing progress and hearing complaints from Eagle Bay residents.

The “substantial completion date” for the structure was August 30th, according to Supervisor Riehle.

At this time, Riehle said the interior work is getting finished, work is being done on the siding, the roof is 95 percent complete, and a lot of mechanical work is done.

“We are negotiating an extension right now,” he said.

Riehle confirmed that penalties are in the contract for failure to deliver a timely product by the contractor.