The third annual CAPPY Duck Derby sponsored by CAP-21 of Old Forge was held on Sunday, September 1st, attracting its biggest crowd ever.

“The race has become part of the Labor Day tradition and I’m thrilled it is so popular. Every year it gets better and a bigger,” said CAP-21 Board President Tim Foley. 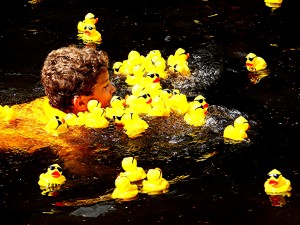 This year had the most ducks in competition, about 200 more than last according to CAP-21 Executive Director Nick Rose. Eleven lucky winners received prizes, however nobody won the big $100,000 prize.

CAP-21 raised approximately $10,000 at this year’s derby, the organization’s only fundraising event.

At the start of the event 3,168 ducks were released at the Old Forge dam, according to Rose. They traveled 300 yards and had to be one of the first to enter a floating chute to win a prize. The chute was built by Ed Booton and is called the “CAPPY duck plucker.”

The $100,000 prize was offered through OddsOn Promotions, a national organization that insures prizes for events such as golf hole in one and half-court basketball shoot. For the CAP-21 event, the number of the pre-selected duck was revealed post race by the company.

The event was made possible through ongoing volunteer support. This includes people who sell the ducks at various events and those who help on Derby day.

Rose particularly noted the support from Key Club members Samantha Notley, Shelby Egnaczyk, Olivia Phaneuf and Mara Gaffney who wore the promotional duck suits and did face painting, and to the kids of all ages who helped to collect the ducks at the end of the race.

Foley expressed gratitude to everyone who was involved—the volunteers and all who support CAP-21 and they we do. He especially thanked the Town of Webb, Highway Superintendent Casey Crofut, and Police Chief Russell, as well as  Doug Criss who managed the dam release which made the race possible.

Funds raised at this event go directly to support CAP-21 projects including education on and removal of invasive species—particularly Japanese knotweed and garlic mustard, the flower basket program along the Main street corridor, the Farmers’ Market and helping community groups with grant writing.

It currently provides support and assistance to the towns of Forestport, Inlet, Webb, Indian Lake and Long Lake stretching across three counties (Oneida, Herkimer, Hamilton) along the NYS Route 28 & 30 corridors.

Prizes were awarded to the first 11 ducks that made it into the chute. The Grand Prize of $1,000, sponsored by Adirondack Bank/Enchanted Forest/Water Safari, was won by Marilee Keller of Williamsville, NY who promptly donated the check to the Strand Digital Fund administered by CAP-21.

The Kellers are long-term seasonal residents of Hollywood Hills.

“We appreciate their support and commitment to our community,” Rose said.