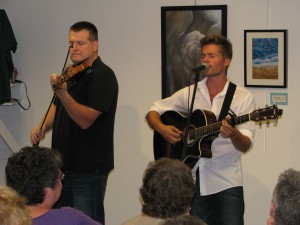 Acoustic musicians Joe Davoli and Nick Piccininni played to a packed house Tuesday, July 16  at the Old Forge Library with over 75 people filling the library hall and listening to a mix of waltzes, swing and bluegrass.

The event was part of the Tuesday evening performances that the library will host throughout the summer.

Upcoming performances include: a “Common Threads: Adirondack Quilts tell their Stories” with Hallie Bond on July 30, “Adirondack Trilogy” with author Tony Holtzman on August 6, “The American Songbook: Jazz Standards” with Elaine Schwart and Roger Bruno on August 13, and “Adirondack Trail of Gold” with author Larry Weill on August 20th.

The Tuesday programs begin at 7:30 p.m. and are sponsored fully or in part by the New York State Council on the Arts.