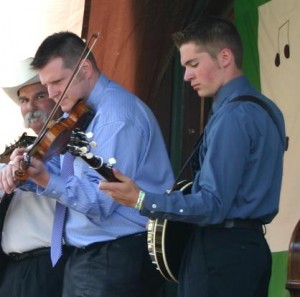 The Old Forge Library will present an Evening of Acoustic Music with Joe Davoli and Nick Piccininni on Tuesday, July 16 at 7:30 p.m.

The two musicians mix it up with fast-paced fiddle and banjo, mandolins, guitar, and beautiful waltzes, swinging tunes, and soulful vocals.

Davoli is a graduate of DePaul University and attended the Berkley School of Music.

He is the recipient of two Syracuse Area Music Awards.

He is also a studio musician, teacher and performs fulltime with the Celtic band Ceili Rain.

Nick Piccininni got his start performing bluegrass music on the five-string banjo, playing in and around New York state.

He honed his multi-instrumental skills performing with the Delaney Brothers, The Atkinson Family and CMT artists the Abrams Brothers of Kingston, Ontario.

He continues to perform with the Delaneys and most recently has been touring with the progressive string band Floodwood.

The event is free and open to the public and is funded by New York State Council on the Arts: the Presenting Program.